Five parties have made it to Parliament

This year, the snap parliamentary elections to the Verkhovna Rada of Ukraine took place on July 21. 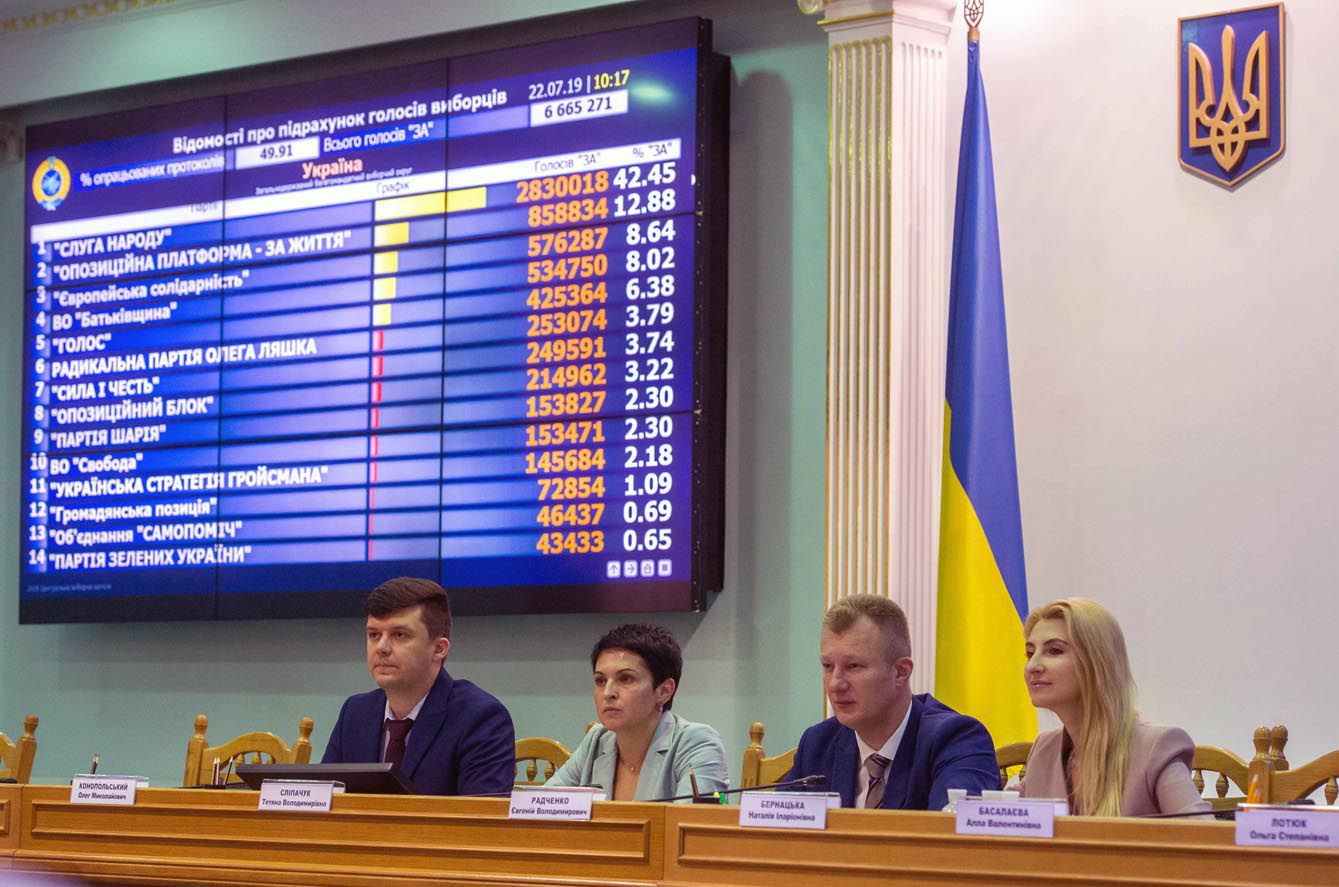 According to the data of the National exit-poll, the outcome of the snap election may be as follows:

Servant of the People collects 44.2% of votes; Opposition Platform - For Life claims 11.4%; European Solidarity comes third with 8.8%. The other two political forces that make it to the Parliament are Yulia Tymoshenko's Batkivshchyna (Fatherland) which gets 7.4% of votes, and Holos (The Voice) enjoys the support of 6.5% of votes. The voters’ turnout was 49,86%.  For the first time in the history of Ukrainian parliamentary elections, the result has failed to reach 50%. Nevertheless, the elections have been considered valid under the current legislation.

President Volodymyr Zelensky commented on the first results of exit-polls, “Seventy-three percent would be better. But we are grateful and frankly speaking, I personally and each of us, we are thankful to the people of Ukraine for support”. Dmytro Razumkov, leader of the party Servant of the People, said, “We are grateful to all who have supported our political force. I am sure that we’ll have good results at majoritarian electoral districts. And I hope very much that very soon we’ll be able to begin what we’ve promised to do this spring”. The first on the party list, Razumkov assured voters that they would come to Parliament as a well-organized team and would consolidate all their efforts to solve all tasks put to them by Ukrainian society.

Speaking on behalf of the pro-Russian party Opposition Platform - For Life , Viktor Medvedchuk stressed that his political force is full of plans and ideas. He put them in a nutshell, “Peace in our country, a drastic change in the economic course, improvement of living standards and building of a prosperous nation”.

Ex-President Petro Poroshenko, leader of the party European Solidarity, gave his commentary on the exit-polls’ results, “The six-month-long election marathon in Ukraine has ended. I’d like to say ‘thank you’ to our team, to each and everyone who today gave his voice for the ES. We’ll do our best to live up to your trust. It’s been not easy. We’ve been the primary target during this election campaign. The spear point of Russian propaganda has been targeted against us. The fifth column assisted by power structures and top officials of the Yanukovych regime have organized quite a few provocations against us”.

Yulia Tymoshenko, leader of Batkivshchyna (Fatherland), was rather reserved in her response to the conclusions of the exit-polls. “I’d like to address all people who have come and voted for Batkivshchyna. I’d like to thank all those who contrary to a fierce information campaign against our team have been with us for the past twenty years. For the long twenty years you have believed in us and in our cause that together we can change life in Ukraine for better. And you are right believing”, said Yulia Tymoshenko.

Well-known Ukrainian rock musician Svyatoslav Vakarchuk, who tops Holos party list, was noticeably pleased with the results of the exit-polls. He said, “First of all, it is clear that people have voted for changes. And we are happy to be part of these changes. It is important for us to move forward. Old politicking regardless of who represents it, of its methods and ideas must be left in the past”.
The Central Election Commission confirms the data of this National exit-poll. After processing 50.01% of e-protocols across the country, the Commission announced that five political parties were elected  to the Verkhovna Rada: Servant of the People collected 42,45% of votes, Opposition Platform - For Life  – 12,88%, European Solidarity  – 8,64%, Batkivshchyna (Fatherland) – 8,01%, and Holos (The Voice) – 6,38%.

Other political parties have failed to overcome the 5% threshold to be elected to the Verkhovna Rada.

In accordance with prognoses of the Central Election Commission,  the Servant of the People party may get 122 sets in Rada under the party lists and additional 115 seats from single-member constituencies. If the party gathers the record number of seats, it will be able to form an independent coalition of 237 members.
The counting of votes goes on. The final results of the snap parliamentary election will be officially published on August 5.

The current elections to the 450-seat Parliament have been held according to the mixed proportional-majoritarian system. Under the current law 225 members of the Verkhovna Rada have been elected by nationwide closed party-list proportional representation  and the other 225 seats elected in constituencies with a first-past-the-post electoral system in one round (candidate with the highest vote total wins).
The newspaper Holos Ukrainy