What the President of Ukraine said in Davos 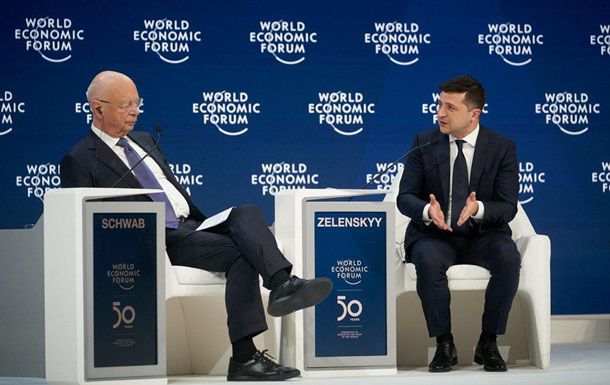 Ukraine is a place where miracles happen

“We’ve prepared a new program that will be called ‘An Investment Nanny’. A company that will bring more than 100 million dollars to Ukraine will be provided with an individual contract with the State. It is the State that will protect you. You’ll have a manager with whom you’ll stay in touch twenty-four hours a day, seven days a week. There will be no problems”, assured Volodymyr Zelenskyy, speaking at the World Economic Forum in Davos.

In his words, as many as 500 State-owned enterprises are ready to be privatized. “Businessmen who invest ten million dollars and more will be granted tax vacation during the first two years. And for five consecutive years, you won’t need to pay income tax”, the President went on to say in his speech.

Zelenskyy invited foreign investors “to become shareholders of success in a new Ukraine”.

“The pragmatic and hardened world needs badly a miracle, while the world economy which is on the brink of a new crisis calls for an economic miracle. And Ukraine is a place where miracles happen”, the Ukrainian President stressed.

According to Zelenskyy, Ukraine takes on an ambitious challenge which is to become the leader of Eastern and Central Europe.

“My goal is to make sure that in textbooks Ukraine will be featured along with Japan, South Korea and Singapore, manufacturers of cases. That’s why we say, Join up! Ukraine must become an investment Mecca of Eastern and Central Europe. The major drive of economic growth is to have an opportunity to get profits. And we are one of a few countries that offer an investor a chance to get a high income on his invested capital”, said the head of Ukrainian State.

Speaking in Davos, Zelenskyy referred to safety hazard as the main threat to the existence of the mankind.

“What is the biggest threat to lasting and enduring peace today? It is a question of safety protection of an individual as well as that of whole countries and nations. The modern world changes with a rocket’s velocity that has transported us in a new epoch. Things that seemed too fantastic, too incredible only yesterday today have become a reality. Unfortunately, it appears that far from everything is positive in our epoch”, Zelenskyy noted.

In his words, such destructive modern processes as trade wars, an arbitrary redistribution of territories, rapidly growing military budgets, separatist movements, secession from earlier agreed international agreements undermine the belief of the mankind in a better future and suggest an idea if this world is not plunging into an abyss.

“As no one else I know what I am saying just now. For the sixth year, my country has been at war. Six years have passed since the day when Russia annexed part of our territory. It has happened despite thousands of written pages of international law and hundreds of organizations that are called to protect the boundaries of my country. True, the world is concerned over this issue. But is it enough for Ukrainians who lost their dear ones and homes in the war? Is the sympathy and concern of the world really enough for them? Of course, not. It is too little”, stressed the head of Ukrainian State.

While in Davos, Prime Minister Oleksiy Honcharuk held a meeting of the National Investment Council. Its members are large foreign companies that have been successfully working in Ukraine for many years now. According to Honcharuk, the topic of the meeting was prospects for future cooperation. He believes that the present-day situation in Ukraine is the most favorable time for foreign investors to put their money in its development, especially now when the World Bank has improved its prognosis for the country’s economic growth from 3% to 3.7% this year. Besides, the inflation rate is steadily decreasing. “Honest competition and equal rules for everyone are our religion”, said the Prime Minister stressing that he will fight for that.

On January 23, Volodymyr Zelenskyy arrived in Israel on a working visit. He will attend the Fifth World Holocaust Forum in Jerusalem. The forum is dedicated to the 75th anniversary of the liberation of the Nazi concentration camp Auschwitz. The Ukrainian President will meet with the leadership of Israel and Israeli businessmen.