Ankara does not recognize Russian annexation of Crimea

President of Turkey Recep Erdogan made this statement prior his flight to Ukraine on February 3. 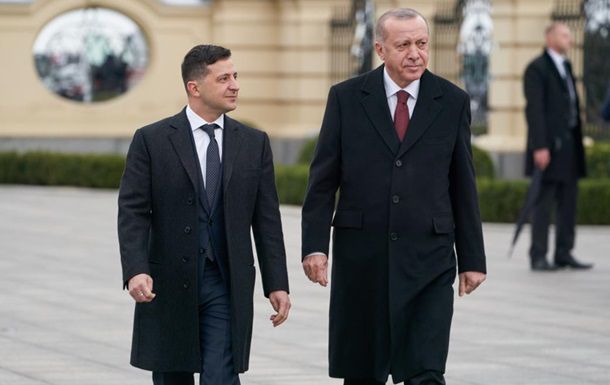 He assured that Turkey would always support independence of Ukraine. Erdogan pointed to the current situation around Crimean Tatars as an important aspect of achieving closer relations between Ankara and Kyiv.

Upon his arrival in the Ukrainian capital on an official visit, the Turkish President met with President Zelenskyy. The two leaders noted previously that their countries were intended to bring bilateral trade deals to 10 billion dollars over the next three years (last year bilateral trade arrangements stood at 4.8 billion).

During the visit of the Turkish President, Erdogan and Zelenskyy focused on the ways of accomplishing this task. During talks much attention was paid to preparing a free trade agreement which is expected to boost trade and cooperation in such areas as tourism, defense industry, infrastructure, renewable energy sources, transport and agriculture.

Apart from bilateral ties, the Presidents discussed regional developments, particularly the annexation of Crimea, the issue of Crimean Tatars, the latest events in Syria as well as measures to enforce the ban on activities in Ukraine of a number of organizations set up by supporters of Muhammed Fethullah Gülen who is considered a terrorist in Turkey.

The Presidents attended the eighth session of the high-level Strategic Council “Ukraine-Turkey” and signed seven bilateral documents, including an agreement on military and financial cooperation.

President Erdogan and President Zelenskyy took part in the work of Ukrainian-Turkish business forum attended by many representatives of Turkish business circles who came to Ukraine specially to visit the event. According to the Turkish President, Turkey and Ukraine are not only good neighbors but also true strategic partners.

Ukrainian political analysts believe that the visit of Erdogan to Kyiv proves that Turkey is a long-term situational ally of Ukraine.

Their conclusion is based on several factors. First, official Ankara is not interested in Russian expansion in the Middle East. As long as Russia is opposed to Turkey’s interests there, Erdogan has nothing to gain from the strengthening of Russia in that region. Thus, on January 29, the Turkish President accused the Russian Federation of unwillingness to meet agreements reached earlier and even threatened with another military operation if Russia does not reconsider its relations with Syrian President Bashar al-Assad. Besides, the current serious standoff between Turkey and Russia in Libya should be taken into account as well. That’s why Turkey will continue assisting Ukraine in its effort to modernize its army.

Second, Ukraine and Turkey appear to have no major political or historical claims to one another and therefore there are no any substantial factors that would or could hinder both countries’ movement for closer cooperation.

Third, the Turkish authorities have declared their readiness to act as a mediator in finding solutions to a number of problems caused by continuous Russian aggression against Ukraine. For instance, Tugrul Turkesh, a parliamentarian from the pro-presidential Justice and Development Party, said, “Turkey has good relationship with Ukraine. We have some relations with the Russian Federation, too. Ad we try to play a certain role in tackling a number of important problems. And we are intended to keep on this job”.

For his part, President Zelenskyy expressed his readiness to promote mutually beneficial ties. At a joint press conference, he said that Ukraine counted on Turkish support in facilitating the liberation of Ukrainian prisoners of war from Russian captivity as well as some Ukrainian citizens, including Crimean Tatars.