The war is not in Ukraine, the war is in the center of Europe

President Volodymyr Zelenskyy believes that it is not correct to say “the war in Ukraine”. 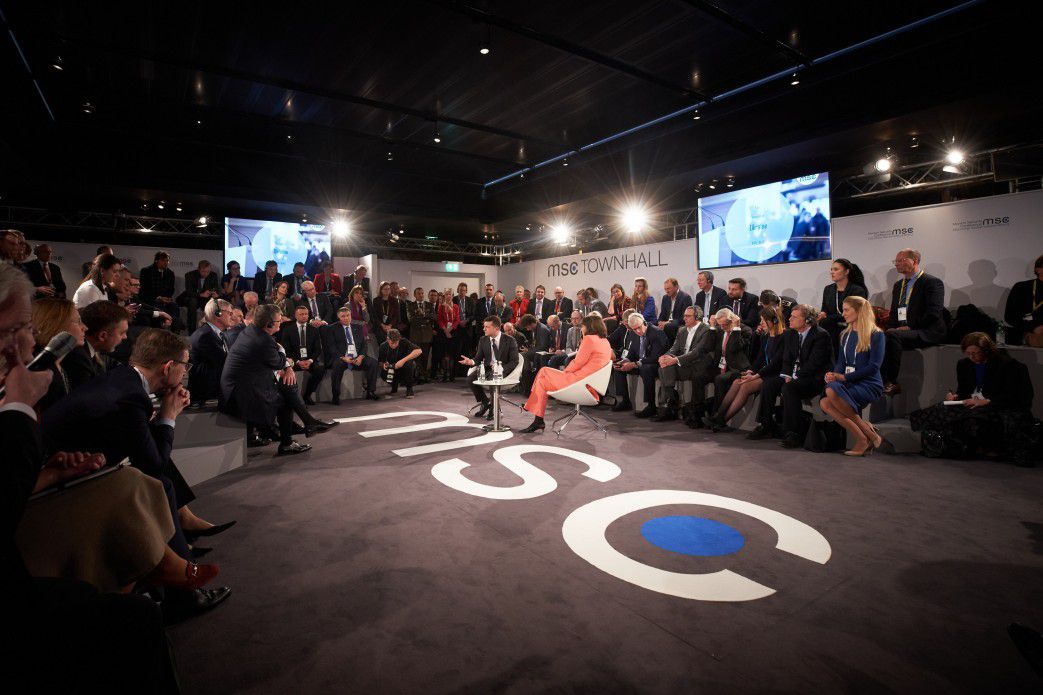 He stressed this at the Ukrainian Lunch that was held during the Munich Security Conference on February 15.

The Ukrainian President has been concerned over the fact that a lesser attention is being given to the Russian-Ukrainian conflict. “Frankly speaking, this is a dangerous tendency. We are aware that there are quite a few challenges and hot spots in the planet today. Unless a problem is settled, it is considered topical and important”, he stressed.

Zelenskyy has added that the moment the conflict could be considered resolved is “when all our people and territories will return to us. We are speaking here about both Donbas and Crimea”.

Addressing the Munich conference, Zelenskyy has called on world leaders to change their rhetoric concerning the armed conflict in eastern Ukraine. “It’s not entirely correct to say ‘the war in Ukraine.’ This is the war in Europe. And along with the annexation of Crimea, it has lasted as long as World War II. Imagine that,” Zelenskyy said in a speech at the “Townhall on Ukraine” panel at the conference.

He has excluded a possibility of Ukraine’s conducting a direct dialog with the chieftains of the self-proclaimed republics in Donbas.

“We are ready to have a dialog with civilian population living in those territories. But we refuse to talk with those who are not recognized by international law and therefore cannot represent local people”. In his opinion, refugees from the occupied territories have to be included in the dialog.

“They have to be drawn to participation in consultations within the framework of the Minsk talks so that they can discuss actively their future as part of a united Ukraine”, Zelenskyy said.

The Ukrainian President has informed the conference that negotiations are underway to release 200 Ukrainian prisoners of war currently kept by Russians.

While commenting on local elections in the self-proclaimed republics this October, the President of Ukraine has said that such elections are possible only in accordance with the Constitution of Ukraine and if security measures and political conditions are kept.

“We plan to conduct local elections across the entire territory of Ukraine, including the self-proclaimed republics, this October. We’d like to hold elections in Crimea, too”, Zelenskyy went on to say. “But to do it without taking elementary security measures and meeting certain political conditions is impossible for us as it would be in violation of the Constitution of Ukraine and international standards of democratic elections”.

According to President Zelenskyy, the Ukrainian party offers to employ the so-called sectoral principle for the disengagement of troops and military equipment in Donbas. Ukraine also supports the idea of establishing control over the occupied region together with representatives of the self-proclaimed republics as an important condition for conducting local elections in Donbas.

Zelenskyy believes that this new principle of disengagement will make it possible to take troops and materiel from the occupied areas of Donbas. But to hold local elections it is also important to restore control over the border and have efficient mechanisms of supervision of the entire occupied region.

In the words of the President, a possibility is considered currently of a joint control. “There will be Ukrainians, representatives of the occupied areas and members of the OSCE mission there”, he explained.

As the newspaper Ukrainska Pravda (Ukrainian Truth) writes referring to a source in the Ukrainian delegation, the proposal of a joint control implies patrolling the occupied region rather than the border only. “The joint patrolling of the occupied region will be carried out by the Ukrainian police, the OSCE and the territorial police force”, said the source. As far as the border is concerned, Ukraine wants to have a direct control over it.

Speaking at the Ukrainian Lunch, Deputy Secretary General of NATO Mircea Geoană has noted that the Ukrainian situation particularly the annexation of the Crimean peninsula by Russia reaches beyond the boundaries of Ukraine and poses a challenge to international security. In his words, Russia has turned Crimea into a military fortress from which it threatens the stability of Europe and the world. The Deputy Secretary General of NATO has declared that the position of NATO allies concerning the comprehensive and practical support of Ukraine is inviolable.

While in Munich, U.S. State Secretary Mike Pompeo has stressed that Russia violated the territorial integrity of Ukraine by annexing Crimea in 2014. That is why, he said, the United States provides Ukraine with weapons in order “to help this courageous country defend itself against Russian aggression”.

For his part, French President Emmanuel Macron has agreed while speaking at the Munich Security Conference with the general statement that Russia is an aggressive country and will remain as such. Although he believes that the West has to give Russians “a strategic chance, a strategic perspective”. He thinks that “we needs a dialog all the same”.