The two flanks of Europe are closer together 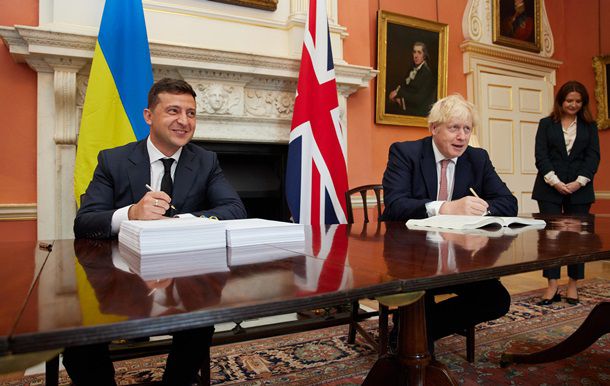 The ceremony of signing this document was held in London during Zelenskyy’s two day official visit that followed the 22nd “Ukraine-European Union” summit in Brussels. The bilateral agreement was necessitated by the UK’s leaving the European Union. It’s the first document signed by Great Britain. And it was signed with Ukraine.

“The historic moment: we’ve signed the agreement. As Prime Minister Boris Johnson said, it means more security, more interaction between Ukraine and Great Britain. Now, the two flanks of Europe western and eastern are closer together”, wrote Ukrainian Foreign Minister Dmytro Kuleba. The bilateral document provides for an increase in trade, attraction of investments to Ukraine and a deeper cooperation in the field of defense and security. The position of a special envoy of the Prime Minister for trade with Ukraine will appear in the Government of Great Britain after the signing of the bilateral agreement.

The sides agreed on launching a special program of technical assistance aimed at training Ukrainian small- and middle-size businesses how to trade with Great Britain. According to information provided by the Ukrainian Foreign Minister, the heads of State also discussed the issue of Ukraine’s aspirations to join the NATO. “Our President was very clear. He said that Ukraine needs a plan of action regarding membership at the Alliance. Such membership will contribute to Ukraine’s security and defense”, said Dmytro Kuleba.

Earlier, Volodymyr Zelenskyy and First Lady Olena Zelenska were granted the audience with their Royal Highnesses the Duke and Duchess of Cambridge. According to British media reports, Prince William and Kate Middleton received the Presidential couple in the throne room of Buckingham Palace on behalf of Queen Elizabeth of Great Britain.

The memorandum was signed by Ukraine and Great Britain for strengthening cooperation in the military and technical fields. The document provides for the re-equipment of the Ukrainian Armed Forces with modern missile boats compliant with NATO standards. It is expected that these boats will compensate Ukraine’s need for ships of such class in the Black Sea and the Sea of Azov.

The memorandum is of great importance for Ukraine as it provides for technical support of its shipbuilding capacities. The first two boats are reported to be built at a British shipbuilding yard with the participation of Ukrainian specialists. Later, the entire production process beginning with the assembly of boats and ending with their equipment with weapons will be done in Ukraine.

The Government of the United Kingdom will provide a ten-year loan for the amount of 1.25 billion British pounds to finance these works. Part of the provided finances will go to build the port infrastructure in the Ukrainian city of Ochakov where these ships will be based.

Analysts maintain that the visit of Zelenskyy to Great Britain is a significant event. Ukrainian political scientist Volodymyr Fesenko writes, “After the withdrawal of Great Britain from the European Union, the contractual basis has to be renewed between GB and Ukraine. The great partnership agreement, virtually an analogy to the Association Agreement between Ukraine and the EU, is a very serious document that deals with trade rules and specifies partnership relations in different spheres. The point is that such documents are rarely signed and this fact enhances the significance of the visit”.

Experts believe that Great Britain is a very strong and important partner that supports Ukraine actively in its efforts to oppose Russian aggression. For instance, recently London has imposed sanctions on companies that were involved in the building of the Kerch Bridge that connects the annexed Crimea with Russia. During the visit of the Ukrainian delegation, Interior Minister of Ukraine Arsen Avakov met with David Quarrey, the Prime Minister's international affairs adviser. They discussed a joint plan for cooperation and information exchange to counter the hybrid warfare that is being waged by the Russian Federation.