“It was about defending the country from its Constitutional Court”

That was a comment Foreign Minister Dmytro Kuleba made about the results of a meeting of the Council for National Security and Defense of Ukraine (CNSDU) that was urgently convened by President Zelenskyy in the evening of October 29. 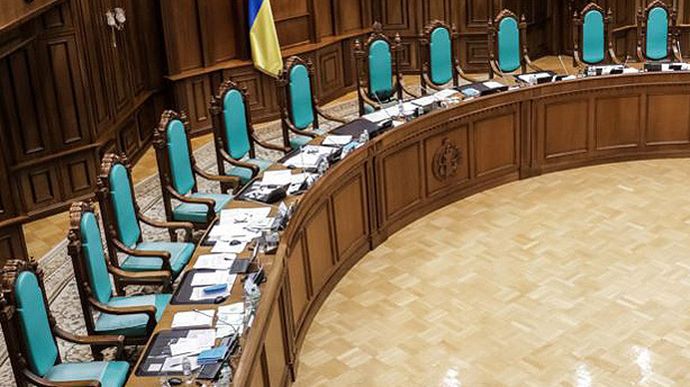 The reason for holding such a meeting was the resolution passed by the Constitutional Court of Ukraine (CCU) two days before. On October 27, the CCU abolished Article 366-1 of the Criminal Code that makes government officials legally responsible for giving false information about their incomes and property in e-declarations. The decision was made on the basis of a petition submitted by 47 parliamentarians, mostly members of the pro-Russian party “The Opposition Platform for Life” and the party “For the Future”. The latter belongs to oligarch Kolomoisky.

By its decisions, the Constitutional Court makes it impossible for the NAPC to get access to the State registers in order to conduct special examinations of the e-declarations of candidates for leading government positions. Without such special checks no one can be appointed to responsible jobs in the Government including those who have been elected at the elections to the local bodies of power that took place on October 25.

According to Judge-Speaker of the CCU Ihor Slydenko, all e-declarations have been annulled in order to protect the judges against the supposed pressure of the executive agencies. However, he said, in its decision the Constitutional Court could not exempt only the e-declarations of the judges from inspection. That’s why the Court abolished this legal norm for all categories of government officials.

The G7 ambassadors and the representation of the European Union in Ukraine expressed their deep concern over the decisions of the Constitutional Court. The United States, as it was stressed in the statement of the American Embassy in Kyiv, supports the Ukrainian people and President Volodymyr Zelenskyy in their efforts to deal with attempts of certain persons who try “to undo the anti-corruption reforms that followed the Revolution of Dignity”.

Such was the situation in which the Council for National Security and Defense held the urgent meeting. Opening the meeting, Zelenskyy had this to say, “The crushing blows that are delivered at the country’s attainments in the sphere of struggle against and effective prevention of corruption in Ukraine cannot be ignored. The immediate and strict assessment must be given to actions of certain individuals that become increasingly dangerous to society”.

In compliance with the resolution passed by the meeting, the government has introduced a temporary access for the National Agency for the Prevention of Corruption to State registers. The temporary access makes it possible for the agency to continue performing special inspections of the e-declarations of candidates for leading positions in the government.

Volodymyr Zelenskyy has proposed to draft a bill on restoring integrity in legal proceedings in the Constitutional Court and submit the bill to the Verkhovna Rada as an urgent piece of legislation.

The decision was also made to step up activities of the Commission for the legal reform under the President of Ukraine and to speed up the submission of proposals to the commission that deal with the implementation of the judicial reform.
In the morning of October 30, Zelenskyy submitted to the Verkhovna Rada a draft law on terminating the powers of the members of the current Constitutional Court. The document was rated as urgent.

President Zelenskyy offers to terminate the powers of the CC judges from the date the law comes into effect and to begin without delay the procedure of selecting a new composition of the Court.

Many analysts believe that considering the presidential bill the current autumn is going to be “hot” in Ukraine. The point is that the Constitution does not provide for mechanisms for ending the powers of the Constitutional Court judges in such a way. The Fundamental Law of the country specifies in clear terms conditions for dismissing the judges. Thus, the composition of the Constitutional Court can be changed only with the consent of the judges themselves. And for this, no less than the two-thirds of the members of the Court is needed.

At the same time, the Constitution clearly defines the grounds for dismissing a judge. These grounds are in particular as follows: his inability to fulfill his duties for health reasons, a serious disciplinary misconduct or a neglect of his duties.