National Security and Defense Council Secretary Oleksiy Danylov made this statement at a session of the Council that took place on March 11. 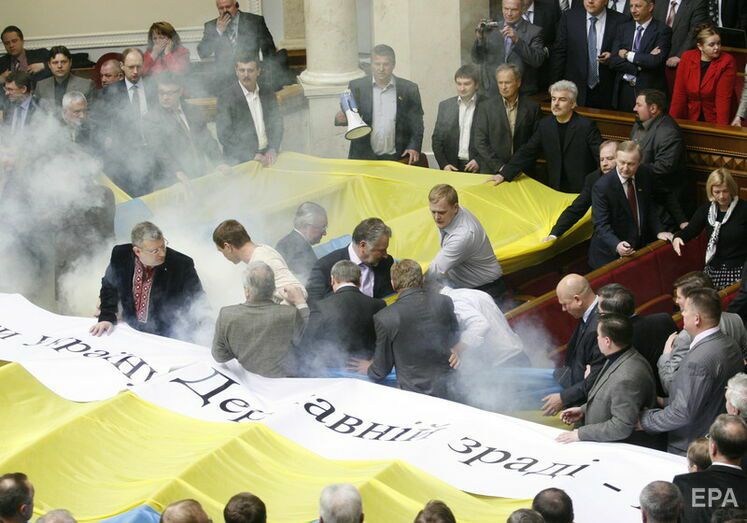 In the photo: the opposition protesting against the ratification of the Kharkiv agreements.

According to Danylov, the NSDC instructed the Security Service to examine the circumstances in which the Kharkiv agreements were ratified in 2010.

Danylov said, “The so-called Kharkiv agreements appeared in 2010. And they were ratified by the Verkhovna Rada in an unprecedentedly short period of time after they had been signed”.

Thus, the Security Service of Ukraine was ordered to find out how it had happened that 236 people’s deputies had voted for the ratification of that document. “And if the SSU considers it necessary, it will begin the criminal proceedings in compliance with Article 111 of the Criminal Code against the persons who are guilty of high treason”, added the Secretary of the National Security and Defense Council.

The agreements on the location of the Black Sea Fleet of the Russian Federation in Ukraine were signed on April 21, 2010, in Kharkiv by the then President of Ukraine Viktor Yanukovych and the then Russian President Dmitri Medvedev. Under this document, the period of the stay of the Russian Fleet in Crimea was extended by 25 years till the year 2042. In fact, the meaning of the signed agreements was simple: Ukraine leased out Crimea to the Black Sea Fleet for an indefinite time. In return, Moscow gave Kyiv a discount on natural gas.

A few days after the agreements had been signed, the document was ratified by 236 votes at Parliament. Before the issue of the Russian Black Sea Fleet was brought to the session hall for discussion, opposition deputies from the patriotic forces attempted in every possible way to block the ratification, but the Verkhovna Rada nevertheless passed the positive decision by the majority of the vote.

In the view of Danylov, it was “the voting for those shameful things” that led to the occupation of Crimea and a part of the Donetsk and Luhansk regions. The criminal annexation of the peninsula became possible due to the Kharkiv agreements after which the Russian Federation began building up the troops of its Black Sea Fleet gradually and uncontrollably.

On March 11, the session of the NSDC also made a decision to return to state ownership the Zaporizhya-based works “Motor-Sich”. “This industrial entity will be returned to the Ukrainian people in compliance with the Constitution and in the nearest future”, promised Danylov. In his words, other strategically important enterprises will also be returned to the state. He went on to say, “Some enterprises of our military-industrial complex have ended up in private hands in a strange way – we are going to consider every case separately. … People who have invested their money in those enterprises will get compensations”, said Danylov. He stressed that these things are done to strengthen the country’s national security.

Some time ago, Chinese investors purchased the control package of shares in the Motor Sich Public Joint Stock Company in the city of Zaporizhya, the deal which the United States spoke strongly against. The point is that this entity is one of the largest engine manufacturers for airplanes and helicopters worldwide. Having state-of-the-art technologies, it is also the only enterprise in Ukraine manufacturing engines for airplanes and helicopters as well as industrial gas turbine installations.

The meeting of the NSDC has approved the state defense order for the next three years dealing with the “Strategy of de-occupation and re-integration of the temporarily annexed territory of the Autonomous Republic of Crimea and the city of Sevastopol”. Also, the decision has been made to create the Center for counteracting the spread of disinformation.