We expect a very difficult period

“The situation with the spread of the coronavirus infection in Ukraine is worsening”, Health Minister Maksim Stepanov said at a briefing on March 23. 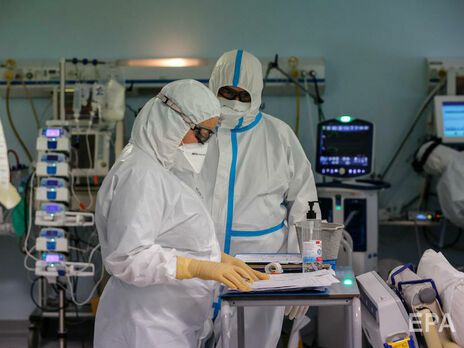 Ukraine ranks sixth in Europe in terms of the daily sickness rate.

“We are going to face a very difficult period. Today, we’ve had the record number of the dead: for the first time in months, more than 300 persons have died of COVID infection in one day”, reported the minister.

Also, the number of hospitalized patients has dramatically increased, too. As of March 22, the country’s hospitals took as many as 36 600 patients who had already been infected with the virus or had been suspected to have it. The number of deaths has increased: last week there were 1665 cases with lethal outcome.

The average fill of the oxygen-equipped hospital beds with COVID patients throughout the country is 55%. The figure is higher in the capital city of Kyiv where more than 70% of hospital beds with oxygen are currently filled with infected patients. The situation continues to be tense in the Transcarpathian, Ivano-Frankivsk, Lviv, Vinnytsya and Mykolayiv regions.

In the morning of March 23, there were more than 1.56 million confirmed cases. More than 30 thousand died. And 1.27 million patients recovered.

Health Minister Stepanov connects the worsening situation in Ukraine with “the detection of a more dangerous type of the coronavirus infection, the British strain” which is three times as much contagious and has the shorter incubation period from one to three days. Also, this strain has a more serious clinical picture.

As far as the spread of the coronavirus infection is concerned, the country has been divided into three zones: red, orange and yellow. According to information provided by the Health Ministry of Ukraine, the “red” zone includes the city of Kyiv and the Zhytomyr, Trancarpathian, Ivano-Frankivsk, Kyiv, Lviv, Odessa, Sumy and Chernivtsi regions where the coronavirus infection is the most common. The “orange” zone includes another 15 regions. And, finally, the “yellow”, a more favorable epidemic zone, has only one region, the Kherson Region.

So, there is every reason for introducing lockdown in Ukraine. This opinion was expressed by Academician Serhiy Komisarenko who is the head of the commission for biological security and biological protection under the Council for National Security and Defense. Komisarenko has stressed that the degree of the virus aggressiveness and a number of patients has considerably increased.

Since February 24, Ukrainians have been vaccinated with Covishield which is manufactured in India under AstraZeneca license. Since the beginning of the immunization campaign, 121 928 people have received the first doses of vaccination against the coronavirus infection. Medical specialists claim that it is absolutely not enough for such country as Ukraine in the condition of pandemic.

In accordance with the vaccination plan for this year, the first to receive free inoculations will be medics who work with COVID patients and servicemen. There are plans to vaccinate by this November the rest of medical workers, officials of the state security agencies and teachers, as well as people who are over 60. From 2021 to 2022, 50% (20 million) of the population of Ukraine are expected to be vaccinated.

Ukraine has not received yet vaccines of other manufacturers though three more coronavirus vaccines have been registered in this country. These are Oxford/AstraZeneca (Covishield), Pfizer/BioNTech and CoronaVac, which has been developed by the Chinese company Sinovac Biotech. In the nearest future, Ukraine will receive the first 700 thousand doses of CoronaVac.

At the same time, Ukraine has refused to buy the Russian vaccine "Sputnik V". Foreign Minister Dmytro Kuleba explained, “Our government is not going to purchase this vaccine. We are not going to pay for mines and bullets with which Russia shoots at our men in the east of Ukraine. The Kremlin has turned its vaccine into a political tool and a hybrid weapon. In fact, Russia does not have enough vaccines to vaccinate its own population but it actively offers its vaccine to any other country. At this point the question arises: Are foreign citizens more important for Russia than its own people? Or maybe in the Kremlin they regard "Sputnik V" as an instrument of foreign policy rather than a means of healthcare”.