U.S. President Joe Biden and Chancellor Angela Merkel of Germany made this statement at a joint news conference after their working meeting at the White House on July 15. 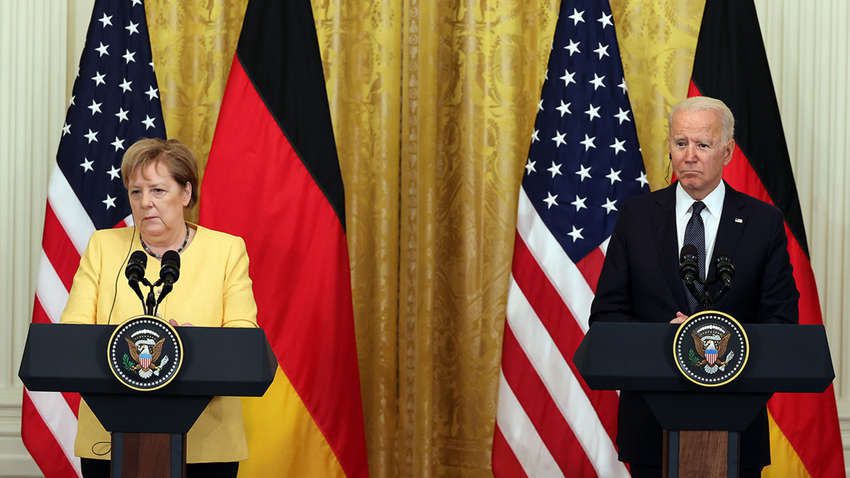 The two leaders gave special attention to the issue of the Nord Stream-2 gas pipeline project and voiced their support for Ukraine.

The American leader stressed that Russia should not use energy as a weapon.

"While I reiterated my concerns about Nord Stream 2, Chancellor Merkel and I are absolutely united in our conviction that Russia must not be allowed to use energy as a weapon to coerce or threaten its neighbours," Biden said in his remarks after their meeting.

For her part, Merkel warned Russia that Europe would take prompt actions if Moscow violates Ukraine’s rights as a transit country.

“Our idea is and remains that Ukraine remains a transit country for natural gas,” Merkel said. She added that Germany stood ready to react to Moscow “should Russia not respect this right of Ukraine that it has as a transit country.”

The Chancellor noted that the United States and Germany have some differences over the Nord Stream-2 to which Joe Biden replied that “good friends can disagree.”

The two leaders stressed once again their support for the territorial integrity of Ukraine.

“And we’ve agreed on our continued support for the sovereignty and territorial integrity of Ukraine as well as the continued importance of reforms and the support for their Euro-Atlantic aspirations,” said Joe Biden.

Merkel noted that Germany speaks up in support for the territorial integrity of Ukraine and this is the reason why she participates in the Minsk process.

Participating in the joint news conference with German Chancellor Angela Merkel, President Joe Biden said, "We stand together and we’ll continue to stand together to defend our eastern flank allies at NATO against Russian aggression."

On the day when U.S. President Joe Biden met with German Chancellor Angela Merkel for talks, President Volodymyr Zelenskyy of Ukraine said strongly that a single decision about Ukraine should not be made without Ukraine.

The Ukrainian President stressed, “The meeting of President Joe Biden and Chancellor Angela Merkel can change the future of Europe. Democratic values, principles and national security cannot be traded for economic interests.”

The Ukrainian President went on to say, “I believe that our partners, the United States and Germany, will stand together against the aggressor and will not encourage it. And no decision about Ukraine must be made without Ukraine.”

The American and German leaders signed the Washington Declaration. “Today, the President of the United States and the Chancellor of Germany affirm their commitment to close bilateral cooperation in promoting peace, security, and prosperity around the world,” says the Declaration.

Biden and Merkel agreed that their countries would uphold the rule of law, transparent and good governance and support civil society and independent media. Germany and the United States committed themselves to defend “an open world. Across the globe, all nations must be free to determine their political futures free from foreign interference, coercion, or domination by outside powers.”

The Washington Declaration stresses that NATO is the cornerstone of the effort to collectively strengthen security, resilience and solidarity.