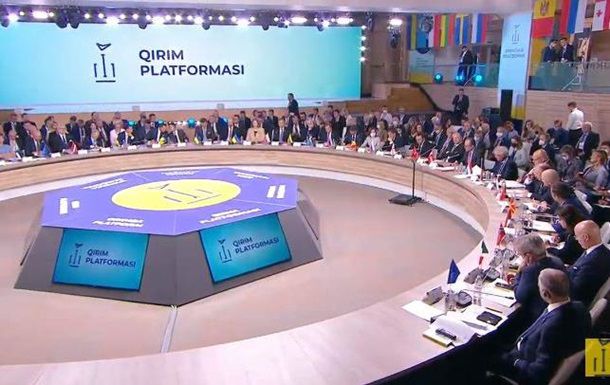 This statement was the main theme of all speeches delivered at the Crimean Platform summit meeting which was held August 23 in the Ukrainian capital city of Kyiv. The summit was attended by delegations of 46 countries and international organizations.

Opening the inaugural summit, President Volodymyr Zelenskyy of Ukraine declared that the issue of Crimea was brought up for the first time at the highest international level.

He stressed, “Ukraine will never be able to return Crimea on its own. That’s why we need an active international support and support at a new level of the solution of the question of the de-occupation of the Ukrainian peninsula.”

In the worlds of the President, Ukraine will use all legal, political and, first of all, diplomatic tools to return Crimea.

Speaking at the opening of the Crimean Platform summit meeting was also Ukrainian Parliament Speaker Dmytro Razumkov. He said, “The Russian Federation separates the inland Ukraine from Crimea by barbed wire and block posts but they will never be able to divide people who live on both side of the dividing line because they are one people. I urge to rally around the efforts carried out by Ukraine. We can resist any challenge if we act together.”

President Andrzej Duda of Poland assured “Ukrainian brothers” that “Poles understand you” and that “you can count on our support.” Duda added that Poland would never recognize the seizure of Crimea.

European Council President Charles Michel declared that the European Union would never recognize the annexation of Crimea by Russia and would continue speaking against the violation of international law.

“The position on Crimea should remain on a high level. The world order should be preserved. And we should attract wide international support for Ukraine concerning the non-recognition of the annexation of Crimea,” he said.

Foreign Minister of Turkey Mevlüt Çavuşoğlu expressed confidence that the Crimean Platform would play an important role in the de-occupation of Crimea and the protection of human rights of Crimean Tatars.

The Crimean Declaration adopted by the summit participants specifies necessary joint diplomatic efforts directed at restoring the territorial integrity of Ukraine within its internationally recognized borders.

In the Declaration, the Crimean Platform participants “underline that any alteration of the status of the Autonomous Republic of Crimea and the city of Sevastopol as an integral part of the sovereign territory of Ukraine is not and will not be recognized, and that Russia’s efforts to legitimize the temporary occupation and illegal seizure are unacceptable.”

The founders of the Crimean Platform “reiterate their commitment to maintaining pressure on Russia to end the temporary occupation by Russia of the Autonomous Republic of Crimea and the city of Sevastopol and to restore Ukraine’s control over the territory.”

Besides, the participants “welcome the establishment of the International Crimea Platform Expert Network with a view to supporting its activities, and invite international and national non-governmental organizations, think-tanks and the expert community to contribute to the network’s activities.”

The summit resolved “to consider further political, diplomatic and restrictive measures towards the Russian Federation, if provided for by the legal jurisdiction of each Participant and in line with respective procedures, when appropriate and should Russia’s actions so require.”

The Declaration urges the Russian Federation “ to comply with its obligations as an occupying power under international humanitarian law and other applicable norms of international law.”

The summit decided to “establish a network of constant and rapid communication between the representatives of the ministries of foreign affairs (to set up Crimea focal points), to recognize the role of national parliaments in addressing the temporary occupation of Crimea and to encourage the coordination of activities on Crimea between national parliaments as well as within inter-parliamentary assemblies.”

The Kyiv summit succeeded in returning Crimea to international agenda, according to President Volodymyr Zelenskyy.

The international Crimean Platform is an initiative of the Ukrainian authorities. It is created to coordinate actions of Ukraine and its international partners to ensure the protection of human rights of Crimeans and to reach the de-occupation of the annexed peninsula.