President Zelensky delivered his first speech at the Verkhovna Rada 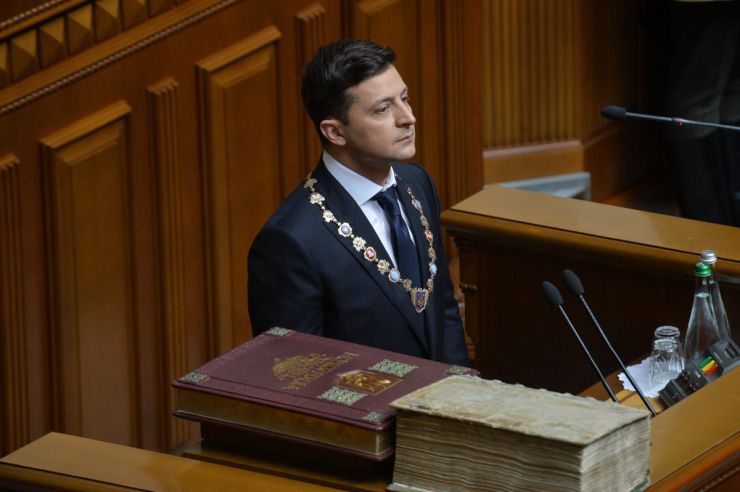 On Monday, May 20th, President of Ukraine Volodymyr Zelensky addressed the Ukrainian people during his inauguration at the Verkhovna Rada.

Present at the inauguration of the head of the Ukrainian State were a number of foreign presidents, many high-ranked guests and diplomats, the previous presidents of Ukraine, members of the Ukrainian Government, people’s deputies and Ukrainian celebrities.

In his speech, Zelensky in part said that “it is our common victory and our common chance”. He also added that the entire nation has to take responsibility for the country.

“And just now not only I have sworn, but each of us has also put their hand onto the Constitution and sworn allegiance to Ukraine”, stressed the President.

Volodymyr Zelensky said addressing those present at the ceremony that Europe begins with every one of us and “it is not somewhere else but right here”. The President referred to the European Union as a dream shared by all the Ukrainian people. He called upon government officials not to hang his portraits in their offices because “the president is not an icon or an idol. He is not a picture either”.

The new head of the State addressed Ukrainians living outside Ukraine. “You should come to Ukraine not as guests but to come home. We are waiting for you. Do not bring souvenirs, bring your knowledge and mental values”, stressed Zelensky. He added that Ukraine needs migrant workers. He called upon them to come back home.

The President believes that the national idea means to start a new epoch and “by joint efforts to do impossible”.

“Each of us has perished in Donbas. Every day we lose one of us”, said the President.

In his inauguration speech Volodymyr Zelensky emphasized that the major task of Ukraine is to stop the war in Donbas.

“I am ready to do everything in my power to prevent our heroes from being killed. We did not start this war but we must end it, – the President went on to say. – And we are ready for a dialog”. Zelensky expressed his strong conviction that the release of Ukrainian prisoners by Russia should be the first step to such a dialog.

In his speech Volodymyr Zelensky stressed that Ukraine has lost not only part of her territories but also the people living there and “we have to return them”.

The President offered the current Government to resign. “Our Government lifts their arms helplessly and tells me that they can do nothing. It is not true – you can. You can take a piece of paper and a pen and vacate your offices for those who will take care of the coming generations rather than think about the coming elections”.

Besides, Volodymyr Zelensky demanded for the Defense Minister of Ukraine, the Prosecutor-General and the Head of the Security Service of Ukraine to step down. The President also plans to disband the Verkhovna Rada of the eighth convocation. He set three priority tasks for the lawmakers to carry out in the two coming months. Thus they have to pass legislations on removing deputy immunity, on elections according to party lists and on bringing to justice for illegal enrichment.

In concluding his speech Volodymyr Zelensky said that all his life he had been trying to do everything to make Ukrainians smile. “The next five years I’ll do everything possible so that Ukrainians won’t cry”.

Verkhovna Rada Head Andriy Parubiy ended the inauguration of the new President of Ukraine with a comment. “It’s been fun”, said the Speaker in jest closing the session of the Parliament.

The Government expects to work for another five years. Will it manage this?

After the presidential election was over, Ukrainian Prime Minister Volodymyr Groisman who has been at the head of the Cabinet for the past three years, repeated over and over again that his Cabinet would continue reforms until a new Parliament has been elected. Because if the country will stop in its development and wait for a new coalition to be formed, everything that has been achieved so far will be lost.

After Verkhovna Rada Chairman Andriy Parubiy announced on May 17th that the parliament coalition “European Ukraine” had discontinued its existence, the Premier voiced his conviction once again that the Verkhovna Rada would be working and making important decisions. “We still have chances. So either we’ll use them in order to strengthen Ukraine or we are going to have another stage of lost opportunities. Let’s change the country in five months’ time”, Volodymyr Groisman urged the deputies.

Now President Zelensky does not think so. During his inauguration speech he declared the Parliament to have been disbanded and called the Government to resign. The Foreign Minister and the Defense Minister which are appointed by the Verkhovna Rada after their candidacies are offered by the President, have already submitted their letters of resignation.

In the meantime, the key problem of payments on the foreign debt which will claim a third of the State Budget still remains. Premier Groisman has repeatedly stressed that his Cabinet has succeeded in the past three years to reduce a part of the foreign debt from 80% to 59% of the gross domestic product. This means that for the first time in many years Ukraine has reached the Maastricht criteria for the EU member states and countries-applicants for EU membership. In keeping with these standards, the State debt of a country does not have to exceed 60% of its gross domestic product.

According to the statistical data provided by the National Bank of Ukraine, the consumer inflation in the first quarter of 2019 slowed down to 8.6% this March compared with 9.8% last December. At the same time, the National Bank of Ukraine has predicted a drop in the consumer inflation to 6.3% by the end of this year. Of course, the NBU’s prognosis does not take into account possible political instability in the country caused by decisions of the new President and the upcoming parliamentary elections.

Last week the Ukrainian Government approved a resolution that widens the list of Russian-made products that are banned to import to the territory of Ukraine. The resolution was passed as a part of the policy of sanctions against the country-aggressor. “The resolution has been drafted and approved on the request of our enterprises and business associates in response to discriminatory or unfriendly actions of the Russian Federation aimed to close the Russian market for Ukrainian products and to limit the transit of goods from Ukraine through the territory of the Russian Federation”, informed the First Vice-Premier Stepan Kubiv.

By its decision that takes effect August 1 of this year, the Government has introduced special custom dues on the import of all goods from the Russian Federation with the exception of the import of such sensitive products as coal, coke, gasoline, liquefied gas and pharmaceuticals.

Parliament activities were the subject of close scrutiny

Since the beginning of this month the Verkhovna Rada has been in session only for a week. However, during this week the work of the Parliament was the subject of special attention of the public. On Monday, May 20th President-elect Volodymyr Zelensky took the oath of office at the Verkhovna Rada. A few days before that, seven proposals on different inauguration dates were submitted to the Parliament. The final decision on this question was made on Thursday, May 16th.

However, heated debates started right from the beginning of last week. On Tuesday, May 14th lawmakers considered and repealed four draft resolutions to cancel voting on the law to ensure the functioning of Ukrainian as the State language. In such a way parliamentarians made it possible for the law to pass the Parliament. Speaker Parubiy signed the bill right on the parliamentary rostrum. Incumbent President Poroshenko signed the bill into law without delay. On Thursday, May 16th the historic law was officially published in the press.

At the same time the Verkhovna Rada worked hard on a number of bills dealing with fuel and energy issues. Of a whole string of bills, two draft laws were about integration of Ukraine into European market. It was envisaged to introduce some changes into an energy market bill. In the course of debates on this issue parliamentarians expressed quite a few critical remarks and suggestions. The session made two attempts to pass the bill but failed.

The Verkhovna Rada supported proposals to conduct parliamentary hearings on the theme “Problems and prospects for protecting cultural heritage in Ukraine”. The Parliament was short on votes to support changes to some legislations aimed at improving social protection of children and families with children. No agreement was reached on conducting parliamentary hearings featuring State nature conservation measures.

On Wednesday, May 15th the Parliament launched the second reading of the bill on introducing improvements and changes into the legislations dealing with activities of the State Agency for Investigations. On Thursday morning the package of the changes was approved and passed as a law.

Passions were running high last Friday too. At the morning session the leader of the faction “People’s Front” declared that his faction was leaving the coalition. Following this decision of the faction, Verkhovna Rada Chairman Andriy Parubiy made a statement that the parliamentary coalition “European Ukraine” ceased to exist on May 17th of this year at the Verkhovna Rada of the eighth convocation.

Consequently, the future destiny of this Parliament became unclear. And later during his inauguration speech President Zelensky declared that he was disbanding the current Verkhovna Rada.