President of Ukraine Volodymyr Zelenskyy chose not to participate in the official ceremony dedicated to the 75th anniversary of the liberation of the Nazi concentration camp Auschwitz. 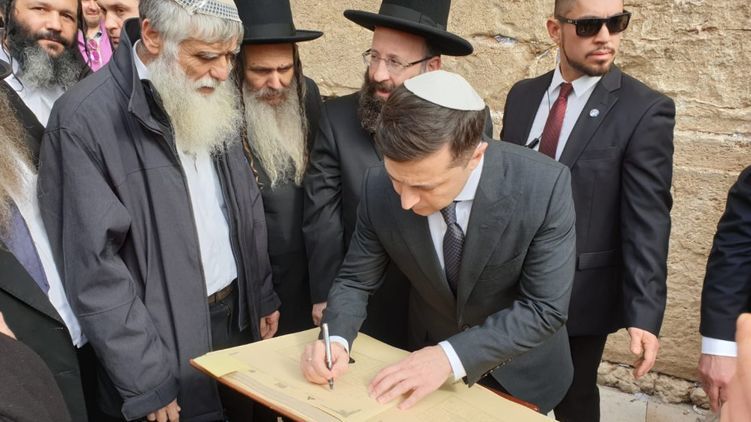 Russian President Vladimir Putin was scheduled to speak at the ceremony. Zelenskyy posted a message in Twitter, “We’ve learned that many Holocaust survivors could not attend the World Holocaust Forum. That’s why our delegation decided to give them their places as did some Israeli ministers. The victims of Holocaust more than anyone else deserve the honor of being present at this forum. Nevertheless, we are going to participate in all scheduled events and have all planned meetings”.

As the press reported earlier, some Holocaust survivors had requested the Israeli authorities to allow them to be present at the official ceremony in Jerusalem with dozens of world leaders and dignitaries in attendance. But their request was denied with the words, “Unfortunately, the number of places is limited”.

So, instead of taking part in the official ceremony, Zelenskyy went to the Wailing Wall to pray together with Moshe Reuven Azman, the Chief Rabbi of Ukraine, for peace and prosperity in his country.

Zelenskyy’s decision not to attend the ceremony where Putin had to speak called forth a mixed respose both in Ukraine and beyond it. For instance, the pro-Russian media described his decision as “a cynical manipulation”.

Israeli journalist Shimon Briman called the decision of Zelenskyy “a move of genius”. Here’s the journalist’s opinion, “President Zelenskyy takes a shrewd move from the stand point of public relations and public morality. He has given his place and the places of his delegation to the Holocaust survivors at the Yad Vashem’s 5th World Holocaust Forum. By his move Zelenskyy reaches two targets: he draws public attention to himself by his noble jesture and evades a necessity to sit in the hall as a silent listener to the speech of the Russian President”.

In his interview to the newspaper Den’ (Day) Ukrainian historian Vitaliy Nahmanovych who is the executive secretary of the Public Committee to commemorate victims of Babyn Yar has criticized Zelenskyy for his decision to go to Israel to become “part of a mob scene for Putin” as well as the very event that took place in Jerusalem.

“Unfortunately, the situation is a lot worse. Leaders of all 40 countries who will be present there will actually become a mob scene for Putin regardless of whether they will be given floor to speak or they won’t. Because for Putin it will be a triumphal return to the world arena as the acknowledged leader of one of the great nations rather than one of the greatest international bandits with whom you must come to an agreement whether you want it or not”, said Nakhmanovych.

In his opinion, the event means “not only the international rehabilitation of Putin and a modern totalitarian Russia” but even more that this “it means the international rehabilitation of Stalin and the totalitarian USSR. After all, the Russian leader does not try to conceal that he is not only a legal successor of the Soviet Union but also an ideological descendant of Stalin and that his goal is the restoration of the USSR within its post-war borders”.

On January 23, the heads of State and Government from dozens of countries gathered in Jerusalem to mark the 75th anniversary of the liberation of the Nazi concentration camp Auschwitz. In attendance there were more than 40 world leaders including President of Russia Vladimir Putin, President of France Emmanuel Macron, President of Germany Frank-Walter Steinmeier, U.S. Vice President Mike Pence, his Royal Highness Prince of Wales Charles.

Amidst disputes on historical memory that are going on between Poland and Russia, Polish President Andrzej Duda refused to go to Israel to participate in the event because he was not given the opportunity to speak while the leaders of Russia, France, Great Britain, the United States and Germany would make speeches. The Presidents of Lithuania and Estonia also withdrew from the summit. Prior the forum, the Israeli authorities announced that the leaders of only four countries, the allies in the Second World War, and the President of Germany would speak at the forum.