During his official visit to Vatican on Saturday, February 8, President of Ukraine Volodymyr Zelenskyy was granted an audience with His Holiness Pope Francis. 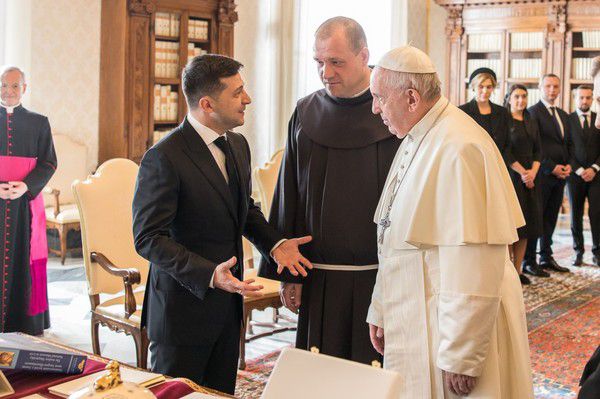 According to reports of the presidential press office, Zelenskyy spoke about Ukraine’s peace aspirations. He asked the Holy See and personally the Pope for help in achieving the peaceful settlement of the armed conflict in Donbas, eastern Ukraine.
The Ukrainian President requested the Holy See to help Ukraine in securing the release of Ukrainian prisoners of war from captivity.

The Head of Ukrainian State placed particular emphasis on the 28-year-long highly productive diplomatic relations between Ukraine and the Vatican the anniversary of which symbolically coincided with his visit.

After the audience with His Holiness, Zelenskyy stressed that he was especially grateful to the Pope for his initiative “The Pope for Ukraine” which had helped thousands of Ukrainians who had suffered from the war in Donbas. Zelenskyy said that Ukrainians were looking forward to the visit of Pope Francis to Ukraine where he enjoys great respect and trust.

“I invited him to come to Ukraine. And I am sure that he will be in Ukraine and not only in the capital city. I told him that in order to understand better what’s going on in the east of our country, one has to go there”, said Zelenskyy.

In commenting on the presidential visit to the Vatican and Ukraine’s interest in maintaining ties with it, Ukrainian political analysts point to several factors. First, the Holy See is expected to be more resolute in condemning Russian aggression. After all, Pope Francis has been quite unequivocal in his comments on this topic.

Second, of special importance is the program of the Vatican “The Pope for Ukraine” under which refugees from Donbas are provided with a substantial financial aid. It’s good that Zelenskyy did not forget to thank the Pope for this program because almost half million Ukrainians could receive so much needed assistance. The total sum of financial aid provided by the Vatican stood at 16 million euros.

Besides, the President of Ukraine has decided to get the Catholic Church involved in the process of prisoners’ exchange. Earlier, only the Ukrainian Orthodox Church of Moscow Patriarchate took part in negotiations on release of war prisoners. As for the assistance of the Orthodox Church of Ukraine or the Greek-Catholic Church of Ukraine, their participation was unacceptable for the Russian side. Now if the Roman Catholic Church joins the negotiations, Russians will unlikely to refuse the Vatican in order not to spoil relations with it. So, on the whole it’s been a smart move by the Ukrainian side.

Without doubt, it’s good that the visit of Zelensky to the Vatican has taken place. However, only time will show whether the Ukrainian President has been able to persuade the Pope to condemn Russian aggression against Ukraine, to continue giving aid to Ukraine and to assist Ukraine in securing release of Ukrainian prisoners of war. If all these things do happen, then the first official visit of Volodymyr Zelenskyy to the Apostolic capital was a success.