Troops of the Russian Federation have attacked Ukrainian positions in Donbas

In the morning of February 18, Russians disrupted a fragile truce and attacked positions of Ukrainian army near the village of Zolote in an attempt to break through the frontline. 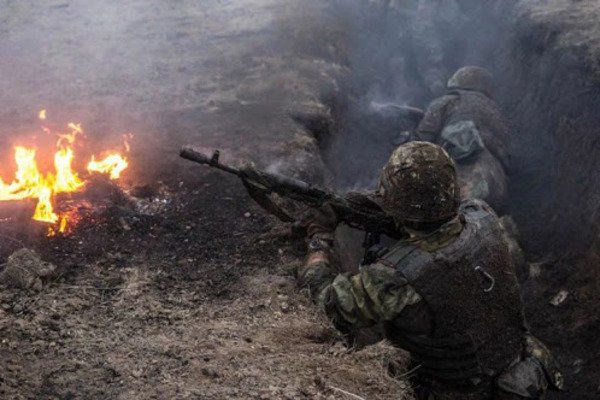 One Ukrainian serviceman died and four were wounded. The shelling began around 3 a.m. and lasted for seven hours. Ukrainian servicemen managed to defend their positions against enemy attacks. In view of a worsened situation at the front, President Zelenskyy has convened an urgent meeting of the Council for National Security and Defense.

In accordance with reports of Joint Operation Forces Headquarters, Russian armed formations attacked the Ukrainian army positions near the villages of Novotoshkovskoe, Orehovo, Krymskoe, and Hutor Volny. Under the continuous firing of guns, Russian occupants launched an offensive operation and made an attempt to advance across the separation line. They fired at the Ukrainian positions from 120-mm rocket mortars, grenade launchers and heavy-caliber machine-guns which are banned by the Minsk agreements.

The Joint Forces have held their positions responding adequately. In accordance with reconnaissance reports, the enemy’s losses consisted of one killed and four heavily wounded. Russia-backed militants do not comment on their casualties.

In his message posted in the Internet, President Zelenskyy wrote that Russia-backed militants and occupants had organized a cynical provocation on the fifth anniversary of the Debaltsevo tragedy.

February 18 of this year marks the fifth year since Ukrainian military have withdrawn from Debaltsevo in Donetsk Region. The Battle of Debaltsevo has become one of the key combat operations of the armed conflict in Donbas. Thousands of soldiers and hundreds of units of military equipment and artillery were involved in the battle on both sides. The Russian army and pro-Russia militants took the city of Debaltsevo under their control in February 2015. Actually, it was the second attempt of a direct Russian incursion into the territory of Ukraine after the Battle of Ilovaisk. As many as eight Russian battalion task forces and several artillery divisions took part in the battle.

“It is not just a cynical provocation aimed at rubbing salt into the Debaltsevo wound that will never heal completely. It is an attempt to disrupt the peace process in Donbas which progresses though slowly but surely”, noted Zelenskyy having informed that the Tuesday meeting of the National Security and Defense Council would decide what further steps are to be taken.

“Our intentions of ending the war and our loyalty to our international agreements remain unchanged as does our determination to repulse any act of armed aggression against Ukraine”, stressed the President.

It has to be noted that Ukraine and Russia reached an agreement on full ceasefire and prisoners’ swap at the December 9 Paris summit.

“The current military provocation is not something casual or done for no particular reason. KGB men like symbolic dates. In fact, it is a reminder of Maidan…. Only a masochist can see peace in the eyes of Putin”, said Iryna Herashchenko, a deputy from the European Solidarity Party, while commenting on fierce fighting that has flared in Donbas.

Parliamentarian Serhiy Rahmanin who heads the faction of the Holos Party believes that the worsening of the situation in Donbas is a price for concessions and troops disengagement. “How many people must die so that we finally understand that any our compromise is our weakness. There should be no concessions until firing is ceased, until Russia stops firing”, he stressed.

And the fifth President of Ukraine Petro Poroshenko called once again not to believe President of the Russian Federation Vladimir Putin with whom the current Ukrainian power tries to reach an agreement on restoring peace in Donbas particularly during the Normandy Format meetings. “This morning Russian troops have launched an offensive operation using heavy-caliber artillery and 120-mm mortars. There are first casualties. Perhaps it is a kind of peace that one has seen in Putin’s eyes. It is a kind of peace that Putin can give Ukraine”, said the ex-President.

At a briefing following the meeting of the National Security and Defense Council, President Zelenskyy assured that the provocation in Donbas would not change the course toward putting an end to the war. He concluded, “I’d like to say that we have a mighty strong army. Provocations do happen but the army has responded adequately… This provocation won’t change our course because with a strong army we can sit down at the table of negotiations”.