The “negotiating triangle” Ukraine-Germany-the U.S. is in the making 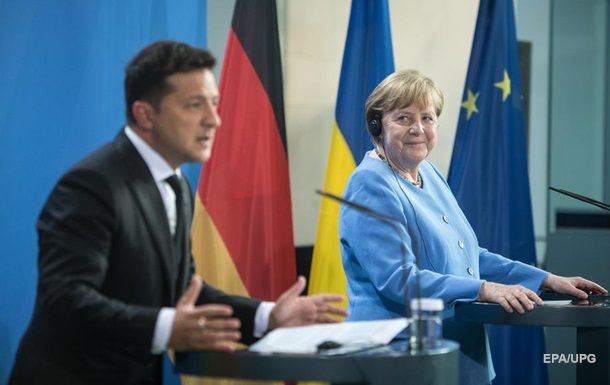 He met with Federal President Frank-Walter Steinmeier and Minister-President of North Rhine-Westphalia Armin Laschet, a candidate to the post of the Chancellor of Germany at the future elections.

In the evening of July 12, Zelenskyy and Chancellor Angela Merkel gave a briefing for the press. Germany undertakes to deliver 1.5 million doses of the anti-COVID vaccine to Ukraine, according to the Chancellor. Stressing the importance of including the Steinmeier Formula in Ukrainian legislation, Angela Merkel assured Ukraine that for Germany it would remain a transit country “even after the Nord Stream-2 gas pipeline project will be completed.”

The Steinmeier Formula provides for the disengagement of troops and military equipment in the war-zone in Donbas and local elections to be held under the supervision of the OSCE in the separatists-held territories of the Donetsk and Luhansk regions. Many Ukrainian analysts argue that the Kremlin may use the results of such elections to demand the special self-governing status for these regions against which a patriotically-minded part of the population of Ukraine strongly protest.

The Nord Stream-2 gas pipeline is a serious threat to Europe which is skilfully disguised under the mask of an economic project, Zelenskyy believes. The Ukrainian President insists that the issue involving this gas pipeline should be discussed by leaders of the Normandy Four at a meeting and that the European Union should give Ukraine reliable guarantees of its energy security. However, Merkel was quite sceptical about the possibility of discussing the Nord Stream-2 issue within the Normandy format.

The Ukrainian President called on “all the countries” to press Russia into holding a summit of the Normandy Four leaders. He offered to attract the United States to the negotiations on the armed conflict settlement in Donbas.

After the press briefing, the Ukrainian and German leaders were engaged in the four-hour talks that ended after midnight.

It should be said that the Chancellor of Germany repeatedly said that though Russia remains a big challenge to Europe a dialogue with Moscow should be continued within the Minsk format in order to resolve the conflict in Donbas. Besides, Merkel stressed that Germany and France plan to agree rules for building relations with Russia because the countries of the international community “regularly come across provocations and new conflicts.”

Experts claim that no concrete political solutions should be expected from the current visit of the President of Ukraine to Germany. It has been rather a preparation platform for making these solutions in the future especially in the view of future elections to Bundestag which will give Germany a new chancellor. Then the epoch of Angela Merkel will end.

The current visit of Zelenskyy is believed to have a preparatory character. Anyway, the Ukrainian President attempted to demonstrate his positions which will enable him to continue talks with a new German Chancellor and the Government of the Federal Republic as well as the leadership of the United States. One of the tasks of the visit is to state the basic positions of Ukraine in negotiations with the future leaders of Germany.

Ukraine hopes that the agenda of the future talks with Armin Laschet, Merkel’s potential successor, will include two key topics: the Nord Stream-2 gas pipeline project and ways of ending the war in Donbas. To set down topics of future discussions now is important so that later the negotiating parties won’t begin talks with a clean page at the end of this year.

As far as the Nord Stream-2 pipeline is concerned, the negotiating parties are going to discuss the negative consequences of the project for the energy security and economic interests of Ukraine as well as the possible ways of how those negative consequences could be compensated for Kyiv. This topic is expected to be discussed besides Germany with the leadership of the United States also.

Today Zelenskyy can discuss problems involving the Nord Stream-2 and the war in Donbas with the leadership of Germany. Later, Angela Merkel will go to Washington to discuss these topics with President Joe Biden. (The American President will meet the Chancellor of Germany at the White House this Thursday. This was reported by White House Press Secretary Jen Psaki on July 9 ‒ Ed.)

Then Zelenskyy will visit the United States where specific solutions are expected to be passed. “So, this July will actually see the birth of ‘a negotiating triangle’ involving Ukraine, Germany and the United States. And it is important that these two major topics and a search for their solution will be in the focus of attention of this triangle,” wrote Ukrainian political analyst Volodymyr Fesenko.

At the same time, the analyst believes that “the negotiating triangle” will come across quite a few difficulties while discussing the problem of the settlement of the situation in Donbas.

Footnote: The project Nord Stream-2 provides for the construction of two gas pipelines with the total capacity of 55 billion meters of gas annually. The pipelines run under the Baltic Sea from Russia to Germany. The Nord Stream 2 is owned and will be operated by the Nord Stream 2 AG, which is a wholly owned subsidiary of Gazprom.

The construction works were suspended by the U.S. sanctions against companies-contractors. But in February 2021, the works resumed as the Nord Stream 2 AG resolved to finish the project on its own.

Ukraine is sure that after the new pipeline has been commissioned, Russia will do everything possible not to extend the term of the current contract for the transit of natural gas to Europe via Ukraine. The contract expires in 2024. This will definitely give Moscow a green light to carry out a more aggressive policy against Kyiv.