The President of Ukraine sets a world record 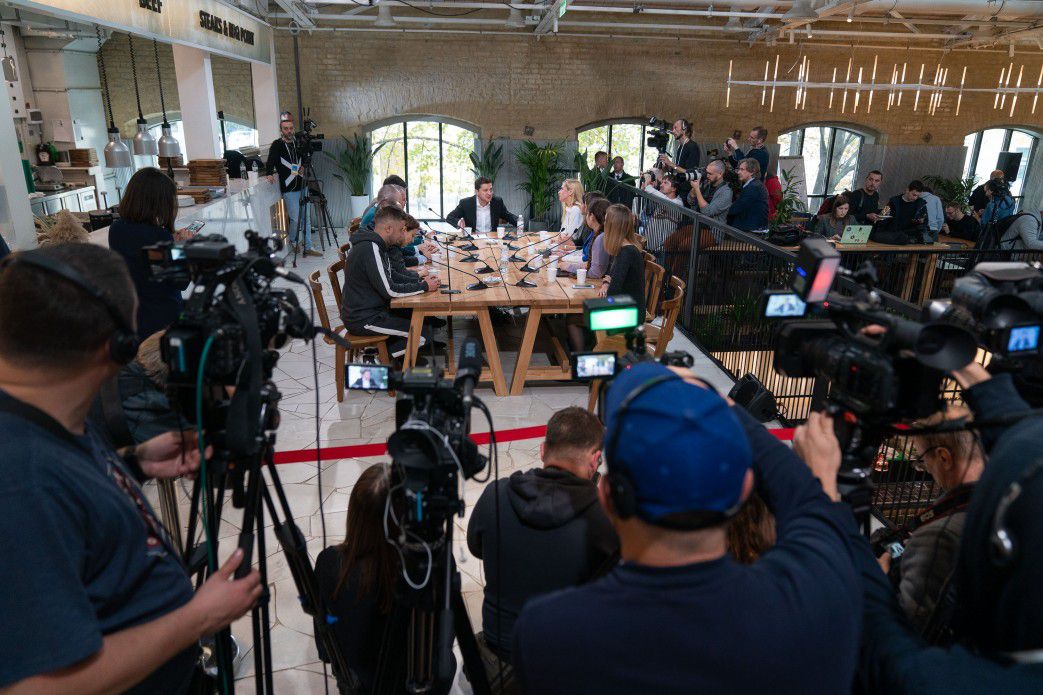 On October 10, Volodymyr Zelensky held a press marathon at one of the Kyiv coffee houses. For more than 14 hours, the President answered some 500 questions, the Office of the President has reported. The longest press conference was attended by 300 journalists.

Judging by the length of the event, the President has set a world record. Groups of journalists were replacing one another at the conference table, while Zelensky continued answering questions. Among the topics raised at the press conference there were peace settlement in eastern Ukraine, a future Normandy Four meeting, the “Steinmeier Formula”, relations of Ukraine with the United States and West European countries, land reform in Ukraine, struggle against corruption to name but a few.

For instance, Zelensky has said that he wants to stop the war in Donbas and regards this mission as the first priority of his presidency.

“When I’ve been elected the President, which Zelensky has the society chosen? They elected the President who would stop the war. That’s exactly like this Zelensky is and will remain”. According to President Zelensky, he has two plans of how to launch peace process, but the first priority of both plans is common people who “will never be abandoned”.

The President has admitted that his team hasn’t done enough to explain people at large the main points of the “Steinmeier Formula”. At the same time, he has reminded those present at the conference that “the formula” has not been implemented yet and that it could start working only within the framework of the law on the special status of Donbas which might not be approved. “We’ve communicated insufficiently with people. And it is our mistake. But there’s no mistake in the formula”, noted the President.

When asked about the public response and acts of protests that followed the signing by Ukraine of the “Steinmeier Formula”, the President said firmly that he is not afraid of a new Maidan and that he is ready to resign if “the society does not want” him to continue his activity.

“I wouldn’t like very much for the conflict in Donbas to be frozen”, – the President went on to say. – “I wouldn’t like that we have another Transdniestria or Abhazia in the east of Ukraine. In fact, I cannot give you a 100 percent guarantee that such thing would not happen because today the situation there reminds very much of Transdniestria”.

Zelensky has stressed that he is not ready to call Russian aggression against Ukraine a war because “after such a declaration we would have nothing to do but to engage in heavy battles to retake Donbas and the Crimea”. “But as a President, I’m not ready to lose our people. That’s why I’ve chosen a way of diplomacy. I’ve always said that my first priority is people and only then territories”, said Zelensky.

He has explained why he “pushes on with” a meeting of the Normandy Four because one Ukrainian is killed in Donbas every other day. “I hope that we’ll know the date of a Normandy Format meeting next week. And I think that the meeting will be held this November”.

The President has shared his plans to request the international community to deploy peacekeepers in Donbas, particularly along the Ukrainian-Russian border and that he wants to discuss this question at a forthcoming Normandy meeting.

As far as the issue of the Crimea is concerned, Zelensky believes that in order to find a right solution to this problem, it should be at first brought up at international talks, particularly to be discussed at a Normandy Format meeting.

Speaking about Russia, the President of Ukraine has stressed that he is ready for direct talks with Vladimir Putin about a new exchange of prisoners to return Ukrainian detainees home. At the same time, Zelensky had to admit that the Ukrainian society could understand his intentions in a wrong way. Nevertheless, “both sides should want to end the war”, – the President expressed his firm belief. – “Both sides should want to meet at any format and start talking and to change political rhetoric. To stop repeating that ‘we are not there, that it is your domestic conflict, that you have to solve it on your own and so on and so forth’. If we talk like that, we’ll hardly reach any positive result”.

In describing current relations of Ukraine with the United States, Zelensky has called them “weary” in the sense that Americans got tired of Ukrainian corruption. The Ukrainian President said that during his telephone conversation with Donald Trump he had invited the American President to visit Ukraine.

According to the Ukrainian President, the American side did not press on him to launch a criminal investigation into the activities of Burisma Company whose board of directors included Hunter Biden, a son of Joe Biden who happens to be the major rival of Donald Trump at upcoming presidential elections in the United States.

Zelensky has explained his comments about the leaders of France and Germany he made during his telephone conversation with Donald Trump, in which he allegedly criticized the role of the European leaders in the settlement of the conflict in Donbas.

“Yesterday, I had a talk with the German Chancellor”, – the Ukrainian President stressed. – “We have very good relations. In fact, we did not bring up this theme. I think the situation is quite clear. I’m sure she knows the reason behind my words. I did not want to offend anyone but I said what I thought. Well, I always do so…”.

Speaking about the ex-President of Ukraine, Zelensky had this to say, “Poroshenko will answer for everything he has done. I’m not going to put any pressure on this. The law-enforcement agencies will deal with that case. As for foreign countries that have allegedly tired of Ukraine, such an opinion has been entirely invented by the Poroshenko team. Unfortunately, he has an illusion in his mind that he is still a President. Of course, it is a big psychological trauma”.