Struggle with COVID-19 and peace in Donbas

President of Ukraine Volodymyr Zelenskyy held a press conference on May 20th which marks the first anniversary since his inauguration. 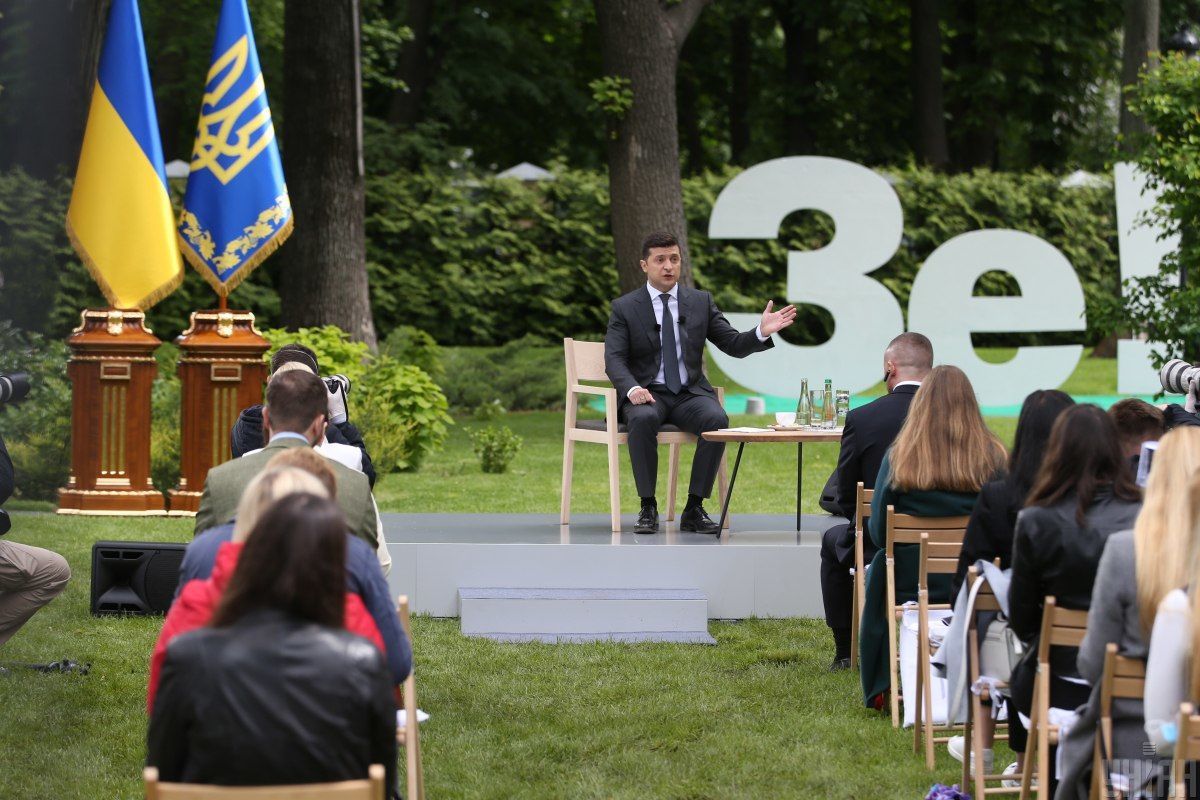 The press conference took place outdoors on a lawn in front of the Mariyinsky Palace in Kyiv. He answered numerous questions about the nation’s domestic affairs.

The main points of the President’s answers:

About the coronavirus and quarantine

The President referred to Prime Minister Denys Shmyhal and himself as “the masters of sports on struggle against COVID-19”. Thus, at the beginning of the pandemic Ukraine had only five laboratories that could perform blood tests, now there are more than 40 such labs. Today, Ukraine has successfully coped with the first wave of the coronavirus infection. And despite COVID-19, the death rate is lower this spring compared with that of last year.

After quarantine is over, it is planned to carry out the next exchange of war prisoners in Donbas. As for the districts in Donbas that are not under the control of the Ukrainian Government, the President is not intended so far to refuse from the Minsk agreements because sanctions against the Russian Federation are tied to them. At the same time, the President is ready to have a dialog with Russia in any format. The result is of importance.

About prospects for Ukrainians

According to the recent prognosis of the UNICEF, 43% of Ukrainians will live below the poverty line. In responding to such a judgment, Zelenskyy said that this organization had mistaken in its estimations. “Yes, the ‘epoch of poverty’ in Ukraine has not ended yet. And as a matter of fact, it could not amid the ongoing world crisis. When one receives a poor country, one has to take certain steps to change it for the better. And we are fighting to do that. Money does not fall from the sky for no particular reason”.

In the nearest future, Ukrainians will be able to get mortgage loans under a 10% interest rate. “The large-scale construction of roads” will continue regardless of the pandemic. Currently, Ukraine needs three billion dollars for the repair of the existing and the building of new bridges.

About the activities of the Government and the Verkhovna Rada (Parliament)

Before the end of May, Ukraine is expected to sign a cooperation memorandum with the International Monetary Fund. As for the draft law on a nationwide referendum, it is ready and will soon be submitted to the Verkhovna Rada. When passed, the law will enable Ukrainians to vote on many important questions including the land market issue. There are no plans to dissolve the current legislature. It will continue working as long as there are important bills to be dealt with.

About his work as the President of this country

Zelenskyy is convinced that he would definitely gather 75% of votes in the second round if the presidential elections were held today. And even more in the first round of the elections that were held in 2019. Zelenskyy firmly believes that he will need more than one term in office to accomplish all the tasks set before him as the President. However, when asked whether he plans to run for the second term, he answered, “I’ll think”.

Zelenskyy is very active and continues working hard. But even after a year in the office of the President, he remains very sensitive to criticism. At the same time, the President has assured that he is not afraid of actions of protests either against him or the current power.

He stated, “I fear nothing. I am sure of every step I take even when I make a mistake. Of course, I avoid making big mistakes ’cause they cost dearly”.