The international coalition of support of Ukraine continues to exist and even goes to a new level. 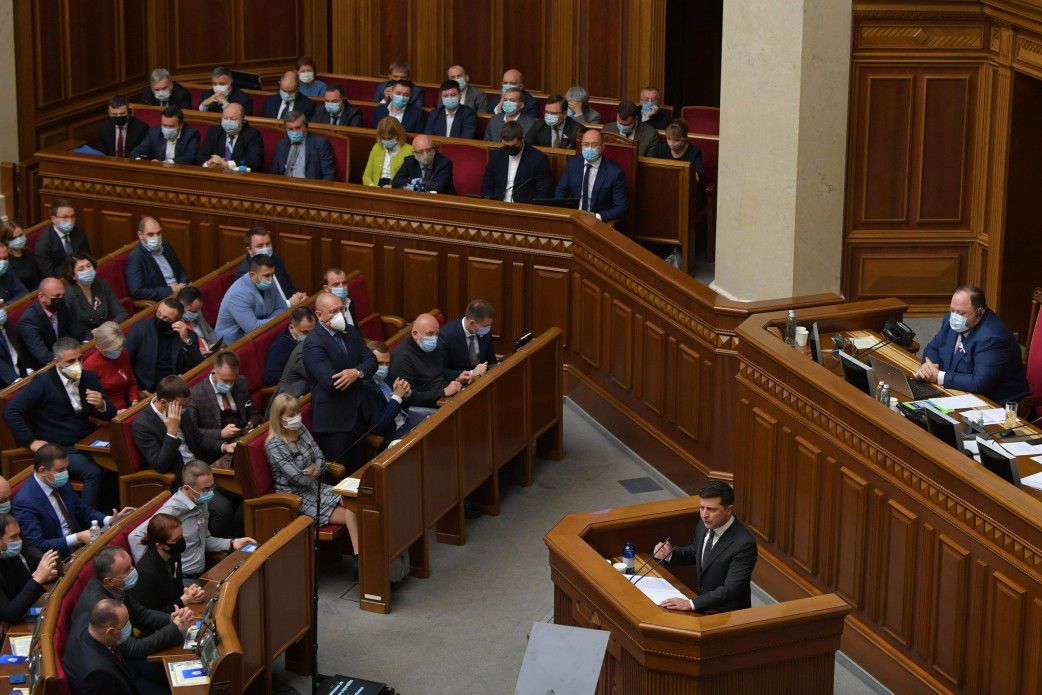 Relations with neighbouring countries have been rebuilt. President Volodymyr Zelenskyy spoke about these and other things in his annual address to Ukrainian Parliament that he delivered on October 20.

Describing the external and internal situation in the country, the President in particular said the following, “No matter how hard whoever will try to convince us, the international coalition does continue to support Ukraine. We continue to enjoy the support of the bicameral legislature of the United States. Ukraine and Great Britain have officially become strategic partners. Relations between Ukraine and Turkey have reached an unprecedented level. Canada is our reliable partner and, without an exaggeration, our international blood brother”.

Also, Zelenskyy referred to the experts’ evaluation of the recent summit meeting “Ukraine-the EU” and the joint statement. They maintain that probably for the first time the partnership between Ukraine and the European Union have been so vividly emphasized.

The head of State went on to say in his address to the Parliament, “Indeed, here is one more fact that, I believe, is an important victory at the international scene: such phrase as “the world is tired of Ukraine” has disappeared and no longer used internationally. We have managed to give a new content to our State. Ukraine begins to be perceived differently. The world regards it as an efficient and reliable and consequently an equal player, as a country that appreciates support but relies primarily on itself. Because we understand that nobody will implement transformations for us, nobody will build a successful country for us”.

In his annual address, the President presented the major guidelines of the country’s development.

Zelenskyy underscored the low mortality rate from the COVID-19 in Ukraine compared with the EU member-countries. He noted that the drop in the GDP is lower in Ukraine than in other European countries.

At the same time, the President said that if the daily number of the COVID-19 infected would exceed 9.5 thousand, the country would introduce strict quarantine measures (in the last few days, the daily sickness rate stood at four to six thousand – Ed.)
In the words of the President, over the months of the pandemic the number of laboratories has been increased. The vertical of State public health physicians has been restored. The problem involving the shortage of facial masks, tests, disinfectants, ventilators has been successfully dealt with. The national production of necessary means of protection has been organized.

“We have increased the salaries of medical doctors who fight COVID-19 by 300 percent”, Zelenskyy said.

According to the President, the Government has audited the State. The results of the full-scale auditing will be presented within the next two weeks. In the near future, the Cabinet has to submit a long-term strategy of the country’s economic development. The President noted in his speech, “Ukraine needs a thorough strategy of economic development, but not for two, three or five years. Moreover, the development of Ukraine must not be measured by political cadences. We must have a clear picture how our economy will be developing over the next ten years and why”.

Zelenskyy stated that Ukraine would continue cooperation with the International Monetary Fund, the World Bank and the European Bank for Reconstruction and Development.

Volodymyr Zelenskyy assured that nothing threatens the visa-free regime of Ukraine with Europe.

The President of Ukraine announced that “the year 2021 will be the beginning of entering the Paperless regime. Ukrainians will no longer need to present certificates or any other papers to any State organization or institution in order to receive services. Our goal for the near future is one hundred percent of State services online”.

“Our diplomats are currently working on preparations for the next Normandy summit in Berlin. We look forward to its early holding and movement towards the long-awaited peace in Ukraine. We do not forget that our citizens live in the Crimea and Donbas”, said the President. As to the issue of the Crimea, Zelenskyy announced the creation of a “Crimean Platform” format the aim of which is to coordinate international efforts to defend the rights of the Crimeans and to attain the de-occupation of the Crimean peninsula”.

Zelenskyy went on to say, “Those who have surrendered the Crimea without a fight must be brought to account. I want for everyone to understand. The question is not about revenge. The question is about justice. Society needs answers. And it concerns not only this question. In fact, people have thousands of them. The absence of answers and justice leads to a loss of trust”.

President Zelenskyy declared that he is ready to dismiss law-enforcement leaders, including ministers, if this measure will help to step up struggle against corruption. In his words, “There is a political will as well as legislative, operative, material and psychological conditions” but there are no real results. At the same time, Zelenskyy said that he has no right to interfere with the work of the law enforcement but he is in the position to give an assessment. And the assessment is unsatisfactory.
The President called on legislators to concentrate on the development of an anti-corruption strategy for the next four years. “I’ll never know rest until I prove that Ukraine without corruption is not a fantasy. But it must be a reality”. He agreed that Ukraine needs the judicial reform.

Zelenskyy dwelled on the topic of Donbas separately. He promised that after the armed conflict in Donbas would be over the combatants with no blood on their hands would be granted an amnesty. “There is a large field for manipulations. Let’s consider it in more detail. The dreadful word “amnesty” does not concern everybody and is not about avoiding responsibility. It is about millions of our citizens who have no blood on their hands and who actually are hostages of invaders. They need a clear signal that they should not be afraid and that only with Ukraine they will have a decent future”, said Zelenskyy.

The head of State informed those present at the Parliament that the military budget would not be reduced by a single hryvnya. There are good prospects for military cooperation with Great Britain, Turkey and the United States. It is planned to build two Ukrainian navy bases on the Black Sea.

Concluding his annual address to the Parliament, the President asked himself three questions and answered them right away.

“Did I think a year ago that to change the country for the better would be so difficult? No. Would I have changed my mind if I had known about it then? No. Will we succeed? Yes! Glory to Ukraine!”

Political analyst Vitaliy Bala, who is the director of the Ukrainian agency for the simulation of situations, maintains that the speech of President Zelenskyy at the Verkhovna Rada was more like the performance of a presidential candidate.

“There is an impression that the election campaign is not over for him. His speech is beautifully written but a very populist one. It is for all good and against all bad. It seems that we and Zelensky live in different countries. We live in a real one with lots of problems and he in his own dream land”.

However, the analyst thinks that the President said some right things, too, especially in the first part of his speech where he spoke about the war in Donbas and about Russian aggression. “Zelenskyy’s rhetoric of these topics has changed over the past year. I think the pressure of Ukrainian society has helped. He has become more careful in his statements and shows more understanding about such sensitive theme as the aggression of the Russian Federation against Ukraine”, said Vitaliy Bala.

Volodymyr Fesenko, a well-known Ukrainian political analyst, believes that the address of the President of Ukraine to the Verkhovna Rada has not been a classic message. It has contained an electoral motive ahead of the elections to the local bodies of power which are scheduled for October 25. “His speech was more like an address to the nation”, wrote the analyst.

Meanwhile, legislators from opposition factions severely criticized Zelenskyy’s speech at the Parliament. “Today, instead of the annual address of the President of Ukraine on the external and internal policy we’ve heard an address of the leader of a political party five days before the local elections. And it has been an exclusively political PR move”, claims Oleksiy Honcharenko, a deputy from the faction “European Solidarity”.

Inna Sovsun, a people’s deputy from the faction “The Voice”, believes that the speech of the President does not correspond to the real situation in Ukraine. “We’ve heard a lot of statements from the President. He has painted a truly rainbow picture for Ukrainian citizens. Unfortunately, it does not coincide with reality which Ukrainians see around themselves every day”, she said.

According to the public opinion poll conducted by the Kyiv International Institute of Sociology in the middle of October, the majority of Ukrainians – 69.5% – have said that things are developing in a wrong direction while 21 % of respondents think otherwise. The rest of the respondents – 9.2 % – found it difficult to answer.