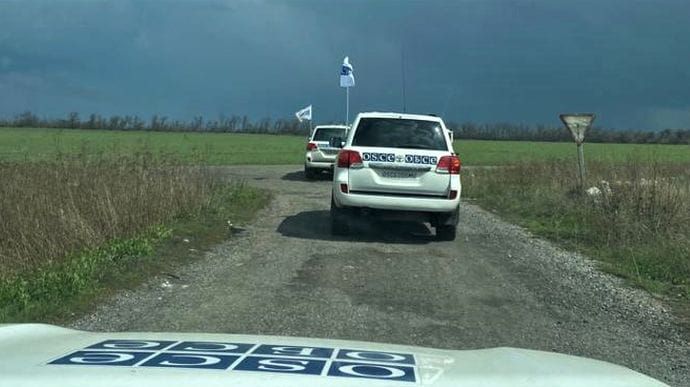 Ukraine regards Russia’s actions to block the work of the Special Monitoring Commission (SMM) as a consistent and deliberate policy to force the Organization for Security and Cooperation in Europe (OSCE) out of the occupied areas in Donbas, eastern Ukraine.

Commenting on the situation, Oleksiy Arestovych, the spokesman for the Ukrainian delegation at the Trilateral Contact Group, said the following, “The SMM of the OSCE has noted a threat to their patrols. For the last two days, their bases in the city of Donetsk and the village of Horlivka have remained blocked. The Ukrainian delegation considers such actions as the systemic and deliberate attempts to undermine the powers of the Special Mission. Considering the fact that the mandate of the SMM has not been prolonged at the two border points near the Ukrainian border with Russia which are currently under the control of Russian military, we regard these actions of the Russian Federation as a consistent and deliberate policy aimed at forcing the OSCE out of the occupied territories. It is a gross violation of the security system in Europe.”

Arestovych also stressed that the Ukrainian delegation views the work of the Special Monitoring Mission as an important basis for the unbiased monitoring of the situation in the region of the conflict in the east of Ukraine and gives the Mission its due “as a force that facilitates a mutual dialog between the sides of the conflict, Ukraine and the Russian Federation.”

According to recent news reports, the Special Monitoring Mission has temporarily stopped its work on monitoring the situation in the areas that are not controlled by the Ukrainian government. The reason was a series of protests organized by the puppet authorities following the detention of Russian citizen Andrei Kosyak near the dividing line.

The News Agency Reuters informs that at least 200 protesters have blocked the headquarters of the OSCE in the occupied Donetsk, demanding Kosyak to be released.

According to Ukrainian military reports, Kosyak was detained on October 13. That day, a group of armed men under the cover of a mine-clearance team attempted to do the recon of the positions of Ukrainian troops. The men wore armbands bearing the letters JCCC (the Joint Center for Control and Coordination).

The Russian propaganda machine describes Kosyak’s detention as the arrest of an unarmed member of the JCCC who allegedly represents the so-called Luhansk People’s Republic though according to the earlier reached agreement only official representatives of Ukraine and the Russian Federation are entitled to be members of the Joint Center for Control and Coordination.

In this connection, Ukrainian journalist Andriy Tsapliyenko wrote, “At Russia’s instigation, the work of the SMM of the OSCE is blocked in an attempt to force this international organization to make Ukraine release Kosyak. If Ukraine gives up and complies, it will mean that she has recognized the existence of such illegal entity as the JCCC and consequently she will have to recognize the Luhansk People’s Republic as one of the sides of negotiations. Such is a tricky plan.”