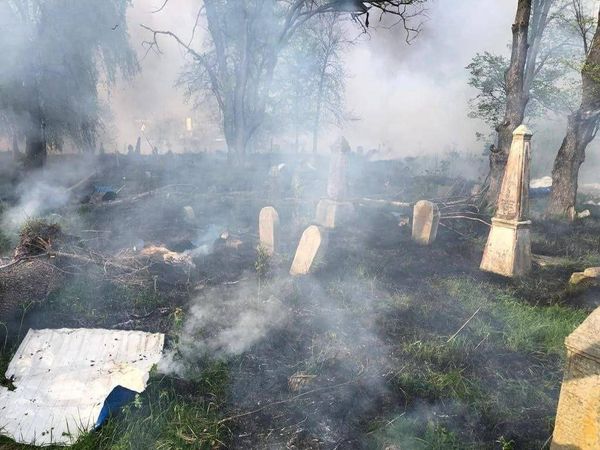 The attack on Shostkynsky district of Sumy region, during which a missile hit the local Jewish cemetery proved once again that there’s nothing sacred for them.

Oleksandr Tkachenko, the minister of culture and information policy stated that russian occupants are no different from the fascists who killed Jews 80 years ago. «Jews, the victims of the 1918 pogrom are buried at the Jewish cemetery in Glukhiv. The mass grave is also a grave of Rabbis, Mehachem-Nochim-David Geselov and Israel-Dov-Ber-Nochimov Shumyatskis. It’s not just a memorial site; it’s a special symbol for the entire Jewish nation. The graves of the key Rabbis remained intact, and that could be the proof that high powers are still on our side», he wrote in his post on Facebook.

It’s not the first attack of the «world’s second army» on Jewish cemeteries. On March 1, russian occupants opened fire on a TV tower in Kyiv. One of the missiles hit the premises of old Jewish graveyard, the Babyn Yar Holocaust memorial. Five citizens of Kyiv deceased as they passed by. After that, Josyp Zissels, the head of the Association of Jewish Communities of Ukraine called the invaders «russian fascists», as they launched the full-scale war against Ukraine since February 24, 2022. «I have always known that they are capable of all sorts of inhumane actions», he said. Josyp Zissels also reiterated that on the first days of the war, russian army attacked the town of Uman that is crucial for the Jews; Rabbi Nachman of Breslov is buried there.

During the occupation of Trostyanets in Sumy region, where russian troops stayed for a month (from late February to late March), the bandits set a checkpoint at the local cemetery, not letting people bury the dead. Mayor Yuriy Bova says that 15 bodies remained unburied for five or six days in a row, and one dead body stayed in the morgue for more than 10 days.

Russian occupants also ruined the Starokrymske cemetery in Mariupol. The non-humans drove their tanks all over the cemetery, ruining the graves and crosses in this graveyard that is considered one of the largest ones in Europe. Citizens of Mariupol buried their relatives here for the last 50 years. On March 10-12, russians captured the settlement of Staryi Krym near Mariupol and settled in the houses of local gardening community not far from the graveyard. They brought their tanks and armored vehicles there. Every day, they would head for their positions and shoot the multi-story houses in the city’s Western neighborhood, passing through the graveyard. «It’s as if there was no cemetery at all. It’s so horrible! They just ran over the crosses sand monuments. Indeed, it’s not so important now that so many people deceased. But it’s sacrilege!», members of the gardening community say.

The occupants plan to create… a recreation area on the premises of ancient Muslim graveyard in Bakhchysarai, in the occupied Crimea. Lyudmyla Denisova, the Ukrainian parliamentary envoy for human rights notes the following: «Back in February, construction vehicles arrived in the Sauskan, the ancient graveyard that is also known as Khan’s graveyard». Their wheels ravaged the graves of the ancestors of Crimea’s indigenous people and the history of this people alike.

According to the Office of Prosecutor General of Ukraine, a pre-trial investigation was launched after the air raid on Glukhiv. Russian pilots involved in this attack are charged with a war crime, and Shostkynsky district prosecutor’s office leads the procedure.

The images show Jewish cemetery in Glukhiv after the russian air strike. The photos are taken from Oleksandr Tkachenko’s Facebook page.