Putin is the one who designs the attack plans but soldiers are the ones who bring these to life, with extreme brutality. 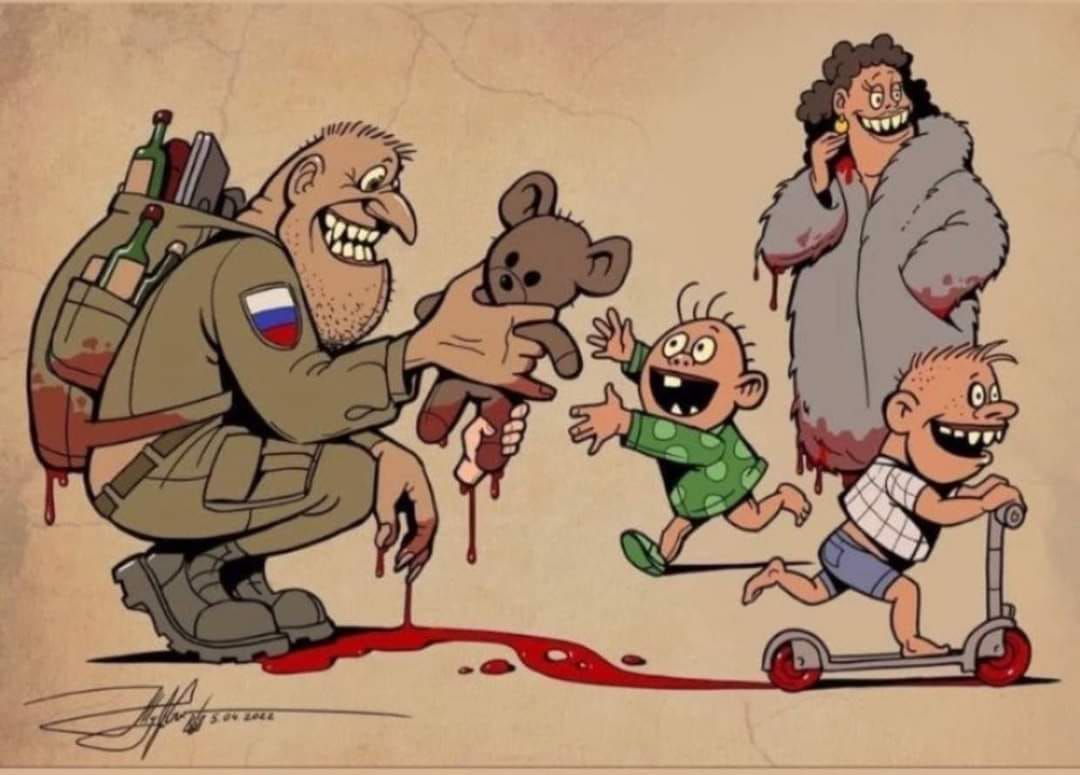 The russian-Ukrainian war that russia started on February 24, launching missile strikes on Kyiv, Kharkiv, Mykolaiv, Mariupol, Kramatorsk, Myrhorod and other Ukrainian cities, revealed something never seen before; a non-human cruelty and bloodlust of russians. It was well-masked under the disguise of «great russian literature» that appeared to be a blank and failed to live up to its main objective – to bring people good and eternal things. It was hiding behind the ‘mysterious russian soul’, the ballet, sport and other things, which in russia are merely a smokescreen for the aggressive policy.

Politicians, artists and common Europeans or Americans are seriously mistaken if they hope that russia is going to change; that when putin is not the leader anymore, russia’s lust for war, passion for murders and tortures and the will to commit atrocities will go away. This will does not only concern Ukrainians – it concerns the entire humankind, everything that is beautiful and highly spiritual. Actually, these things cause extreme anger among the descendants of Ivan the Terrible who killed his own son in rage, and Stalin who threw millions of his compatriots to concentration camps. And both of these men are national heroes in russia. Putin actually is russia – always aggressive, evil, obnoxious and cynical, and it wields either a sword or a nuclear weapon for ages. Since the times of the princes of Kyiv Rus, Ukraine survived almost 30 wars with russia. And it’s only the number of actual full-fledged armed aggressions. There are also cases of linguocide, wars against Ukrainian church, Ukrainian culture, three man-made famine campaigns and economic wars.

Putin is the one who designs the attack plans but soldiers are the ones who bring these to life, with extreme brutality. Thousands and tens of thousands of people who invaded from russia and belarus and crossed the border of sovereign Ukrainian state committed crimes against peaceful civilians. They squashed light-duty cars with people inside, using tanks; they shot the evacuation convoys, using all kinds of weapons including artillery; they use captured buildings to set the torture chambers for prisoners of war and whoever they suspected to be hostile; they raped women, men and even children. The war showed the true nature of russians. This nature also may be seen in the calls of wives of russian occupants to kill and rape, to “cut the stars on people’s backs”, to cut off the victims’ fingers, ears and genitals.

The SBU (Security Service of Ukraine) intercepted another shocking phone conversation between the russian soldier who is now in Ukraine and his mother.

«So you’re making barbecue, huh? Make some barbecue from these Ukes! (Uke – short for «Ukrainians»; a typical scornful nickname for the Ukrainian nation invented by russians, - Holos Ukrainy) Give them hell! Roast them! Jerks! I used to take it all calm, and now I hate them – after all they’ve done!», she says. The «peaceful» russian blames Ukrainians for protecting their own country from the enemy and for russia’s military failures and economic issues. For her, they are the reason why the military parade timed to May 9 is not the same it was before, or the reason why they lose their jobs. «I don’t know why they would host this parade. Why the hell do they need it? It’s a disgrace…  It hurts… and still he (Putin, - Holos Ukrainy) decided to host it. People are in no mood for it… It’s so stupid. Everyone looks so upset. Well, most of the people. They understand that the situation with the job is now difficult, and these sanctions work. So basically, everything sucks. The prices grew…», she said.

The other intercepted conversation between the russian invader and his relative or a familiar person proves that the occupants rudely violate the laws and customs of war, using phosphorous and cluster munitions. These are especially dangerous and brutal kinds of weaponry, and these are banned by international conventions, the SBU insists.

One of the occupants shares his view on the course of military actions: «Well, everyone just waits for Volodya (vladimir putin) to get tired of it all, to withdraw the troops and launch Topols (Topol is the intercontinental ballistic missile that carries nuclear warheads, - Holos Ukrainy). So, as you can see, they let us use everything that is banned by international conventions (cluster munitions and phosphorous munitions), and we shoot it all over there», he said.

Since 2014, the SBU repeatedly documented the use of banned munitions by russian occupants in the combat area. Since the full-fledged invasion began, these war crimes have been observed all over the frontline. The evidence of these war crimes committed by the russian army will be handed over to the international courts. The world has to realize that Ukraine fights the absolute evil, and it will be defeated thanks to the fortitude and courage of the Armed Forces of Ukraine, the Ukrainian people and international support.